My husband and I have been married for almost 18 months. I think that means we’re still newlyweds.

I know we still have a lot to learn about married life. It’s not easy blending two big personalities together into one harmonious couple… but we make it work.

Much of what I’m learning about marriage is how to be both an independent feminist and a loving wife.

Luckily I already knew before the wedding that you can be a feminist even if you don’t keep your maiden name. You can totally change your last name and still be a feminist.

I’m a feminist. I didn’t keep my maiden name.

But I didn’t change my last name either. 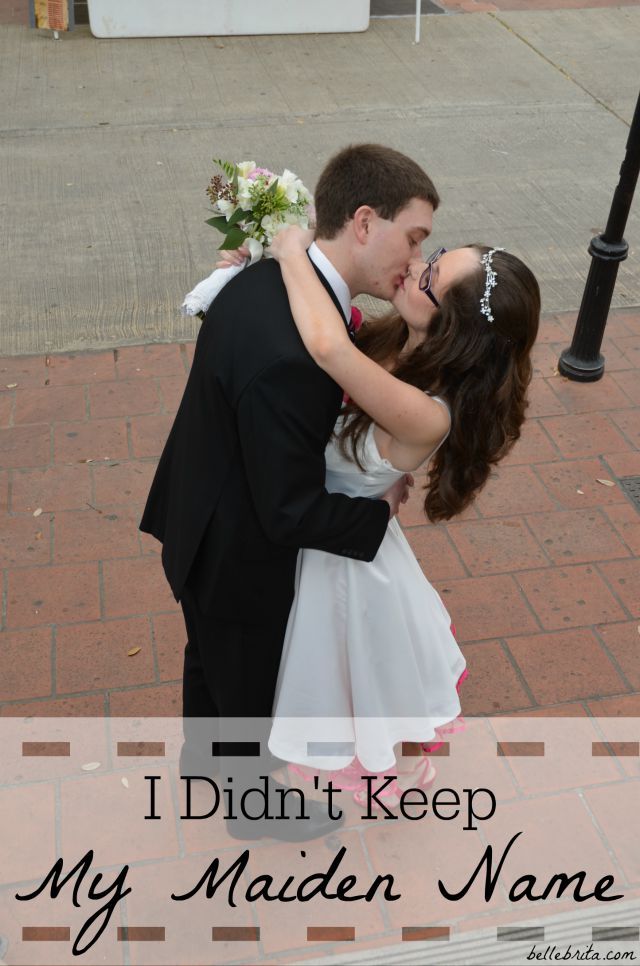 If a woman doesn’t change her last name upon marriage, she does not keep her maiden name.

She keeps her last name.

A woman’s last name only becomes a “maiden name” (which is still an archaic term thanks to a patriarchal society) if she changes her last name upon marriage.

Did my husband keep his “bachelor name” when we got married? Saying that is ridiculous. So why do people keep talking about women keeping their “maiden names” when they get married?

All my important legal documents have the same name on it.

And yet somehow, even professional publications and journalists can’t manage to figure this out.

From The Chicago Tribune: A bride-to-be asks about keeping her maiden name

From The New York Times: Maiden Names, on the Rise Again

Granted, some dictionaries still define maiden name as “the name given to a girl upon birth.” But since we no longer define marriage as a transfer of property from a woman’s father to her husband, I think we’re way past due for updating our ideas of women’s surnames.

I love what Anne Theriault says about this topic in “Stop calling it my maiden name.”

So why is the term “maiden name” not just incorrect but also totally problematic? Well, because it’s based on several outdated assumptions. First of all, there’s the idea that a woman is not an autonomous person but rather a thing belongs to a man, and her last name signifies which man she belongs to; until she marries, she belongs to her father, and then after she marries, she belongs to her husband. Referring to a last name as a “maiden name” reinforces the idea that it’s a transitory type of name — not a woman’s real last name, but rather just the name she keeps until she finally fulfills her lady-destiny and lands a man. Second of all, there’s all kinds of weird purity bullshit happening here. We’re basically referring to the last name a woman is given at birth as her virgin name, the implication being that she won’t have sex until she’s married, at which point she will take her husband’s name…

It’s pretty telling that there’s no male equivalent to the term maiden name. This is because men have always been considered people, and therefore have always been entitled to their last names — unlike women, who traditionally only ever get to borrow a last name from whichever man she has the closest relationship to. People often don’t want to admit that last names are a form of showing ownership, and while I get that we don’t legally use them in this way anymore, there are still a lot of weird vestiges from the time when women were considered to be less than human.

I really just want to quote almost everything Anne says in her article. I highly encourage you to go read the entire piece. And I’m totally with her that I want people to stop saying my last name is my maiden name.

Kate Tuttle at Dame Magazine writes with equal persuasion and brilliance in “Let’s Set ‘Maiden’ Name Out to Sea – Forever.” She critiques the article in The New York Times that I linked above.

Let’s start with the Times’ use of the outdated, thoroughly sexist, actually-kind-of-offensive-if-you-think-about-it term “maiden name.” The word itself—maiden—is an old one, carrying a constellation of meaning: young girl, unmarried girl, virgin. Its meaning of “doing something for the first time” is most commonly applied to non-human entities—we hear of a ship’s maiden voyage, a horse’s maiden race. But when applied to people, it reminds us of one thing: that marriage as an institution once demanded a virgin bride who was handed from her father’s house to her husband’s, and that the name she had worn since birth was discarded along with her virginity upon the occasion of her wedding day.

American women have (mostly) kicked coverture laws to the curb. Isn’t it time we did the same thing with so-called maiden names?

The Question No One Asks My Husband

Why My Husband & I Did Premarital Counseling Before He Proposed

The Perfect Wedding Dress for This Feminist Bride

May the 4th be with you... Yes, I'm a Star Wars nerd and proud of it. Note: I wrote this post … END_OF_DOCUMENT_TOKEN_TO_BE_REPLACED

I just want to blog about nothing and everything right now, so... Whatever Wednesday! Please enjoy … END_OF_DOCUMENT_TOKEN_TO_BE_REPLACED

Y'all. It's been a minute. Or roughly 6 months. I've taken blogging breaks before. I even … END_OF_DOCUMENT_TOKEN_TO_BE_REPLACED