Figuring out the correct usage of feminist terminology can be confusing. Even though I’ve been studying feminism, feminist history, and feminist theories for over a decade, I have still found myself googling certain words and vocabulary.

But feminism doesn’t need to be complicated. If you’re new to feminism, I can help! This is the first in my series on Feminism 101. 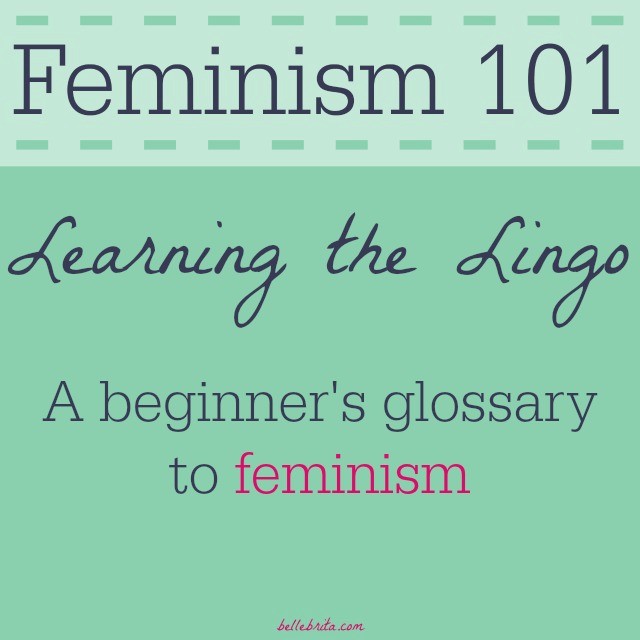 I’ve spent more than a decade explaining some of the basic concepts behind feminism to people who ask me about it, so I’ve finally decided to consolidate what I’ve learned in one place.

The best place to start? With feminist vocabulary!

To any feminists reading these posts: this is very much an introduction to feminism. I’m sticking to the basics for now. I’m happy to point you to more advanced feminist writing if you’re interested.

To everyone: I am not a perfect person, nor a perfect feminist, but I do spend as much time as possible becoming a better feminist, and thus a better person.

Let’s start with the most basic question of Feminism 101: what is the definition of feminism? 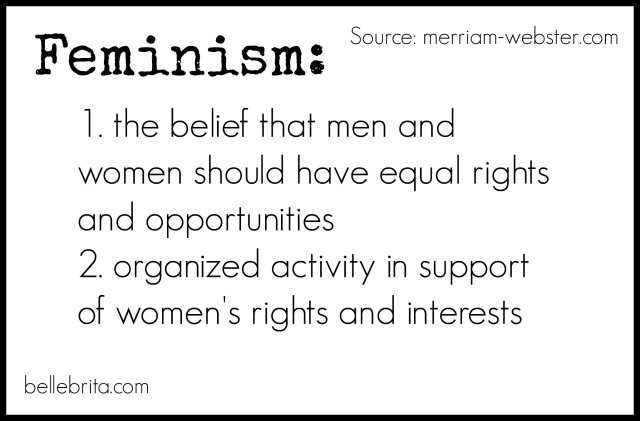 Huh, there’s nothing about burning bras (a myth, for the record) or misandry in that definition, straw feminist depictions that irritate me the most. Like Sarah Bessey said in her book Jesus Feminist, “At the core, feminism simply consists of the radical notion that women are people, too.”

Ableism: discrimination or prejudice against individuals with disabilities

Androcentric: dominated by or emphasizing masculine interests or a masculine point of view

Asexuality: the lack of sexual attraction to anyone, or low or absent interest in sexual activity

Benevolent sexism: a subjectively positive orientation of protection, idealization, and affection directed toward women that, like hostile sexism, serves to justify women’s subordinate status to men

Biphobia: aversion toward bisexuality and bisexual people as a social group or as individuals

Bisexuality: an identity for which sex and gender are not a boundary to attraction

Christian egalitarianism: all people are equal before God and in Christ; have equal responsibility to use their gifts and obey their calling to the glory of God; and are called to roles and ministries without regard to class, gender, or race

Cisgender: denoting or relating to a person whose self-identity conforms with the gender that corresponds to their biological sex; not transgender

Creep(er): a strange person who you strongly dislike; an unpleasant or obnoxious person; someone who causes you to feel nervous and afraid

Complementarianism: a theological view that men and women have different but complementary roles and responsibilities in marriage, family life, religious leadership, and elsewhere; these separate roles preclude women from specific functions of ministry within the Church

Cultural appropriation: when members of a dominant or privileged group exploit the culture of a marginalized group, often without understanding the latter’s history, experience, or traditions

Double standard: a set of principles that applies differently and usually more rigorously to one group of people or circumstances than to another; especially a code of morals that applies more severe standards of sexual behavior to women than to men

Fat-shaming: unkind and usually public criticism of someone for being overweight

Hegemony: preponderant influence or authority over others; the social, cultural, ideological, or economic influence exerted by a dominant group

Heteronormative: of, relating to, or based on the attitude that heterosexuality is the only normal and natural expression of sexuality

Homophobia: irrational fear of, aversion to, or discrimination against homosexuality or homosexuals

Institutional racism: societal patterns that have the net effect of imposing oppressive or otherwise negative conditions against identifiable groups on the basis of race or ethnicity; in the United States, institutional racism results from the social caste system that sustained, and was sustained by, slavery and racial segregation

Intersectionality: concept often used in critical theories to describe the ways in which oppressive institutions (racism, sexism, homophobia, transphobia, ableism, xenophobia, classism, etc.) are interconnected and cannot be examined separately from one another; first came from legal scholar Kimberlé Crenshaw in 1989. Brita’s Note: Learn more in my 101 post on intersectionality.

Kyriarchy: a concept first created by Elisabeth Schüssler Fiorenza in 1992 to describe her theory of interconnected, interacting, and self-extending systems of domination and submission, in which a single individual might be oppressed in some relationships and privileged in others. Brita’s Note: Learn more in my 101 post on intersectionality.

Male gaze: presentation of media, such as films or advertising, from the perspective of a heterosexual man

Men’s rights activists (MRAs): people who believe that social, legal and economic discrimination against males is present in society to the extent that fighting it deserves an organized effort mirroring feminism; generally have asserted since the 80s that women and feminism “went too far,” and have harmed men in the process

Misandry: a hatred of men

Misogyny: a hatred of women

Nice Guy (TM): men who view themselves as prototypical “nice guys,” but whose “nice deeds” are in reality only motivated by attempts to passively please women into a relationship and/or sex. Brita’s Note: If I ever refer to someone as a nice guy, without capital letters, I genuinely mean he’s a good man. The capital letters refer to the above Nice Guy.

Objectification: the treatment of someone like an object instead of a person

Patriarchy: social organization marked by the supremacy of the father in the clan or family, the legal dependence of wives and children, and the reckoning of descent and inheritance in the male line; broadly, control by men of a disproportionately large share of power

Privilege: a set of advantages (or lack of disadvantages) enjoyed by a majority group. Brita’s Note: Learn more in my 101 post on privilege.

Purity Culture: the view of any discussion of things of a sexual nature outside of the context of heterosexual marriage as taboo; adherence to a strict heteronormative lifestyle that forbids most physical contact with significant others, as well as engaging in self pleasure, or holding lustful thoughts about another person that is not a spouse; includes an insistence on female modesty and responsibility to shield boys and men from sexual temptation. Brita’s Note: Learn more in my 101 post on Purity Culture.

Racism: a belief that race is the primary determinant of human traits and capacities and that racial differences produce an inherent superiority of a particular race; racial prejudice or discrimination

Rape culture: a society in which rape is pervasive and normalized due to societal attitudes about gender, sex, and sexuality. Brita’s Note: Learn more in my 101 post on rape culture.

Sexism: prejudice or discrimination based on sex; especially discrimination against women; behavior, conditions, or attitudes that foster stereotypes of social roles based on sex. Brita’s Note: Learn more about the difference between sexism and misogyny in my post on everyday sexism.

Straw feminist: a made-up version of a feminist that doesn’t really exist, used in straw man arguments against feminist ideas

Transgender: of, relating to, or being a person who identifies with or expresses a gender identity that differs from the one which corresponds to the person’s sex [assigned] at birth

Transphobia: intense dislike of or prejudice against transgender people

Victim-blaming: here the victim of a crime, an accident, or any type of abusive maltreatment is held as wholly or partially responsible for the wrongful conduct committed against them

Wage gap: the difference between the amounts of money paid to women and men, often for doing the same work

White Feminism: a set of beliefs that allows for the exclusion of issues that specifically affect women of color; a “one size-fits all” feminism, where middle class white women are the mold that others must fit

Womanism: a form of feminism focused especially on the conditions and concerns of black women 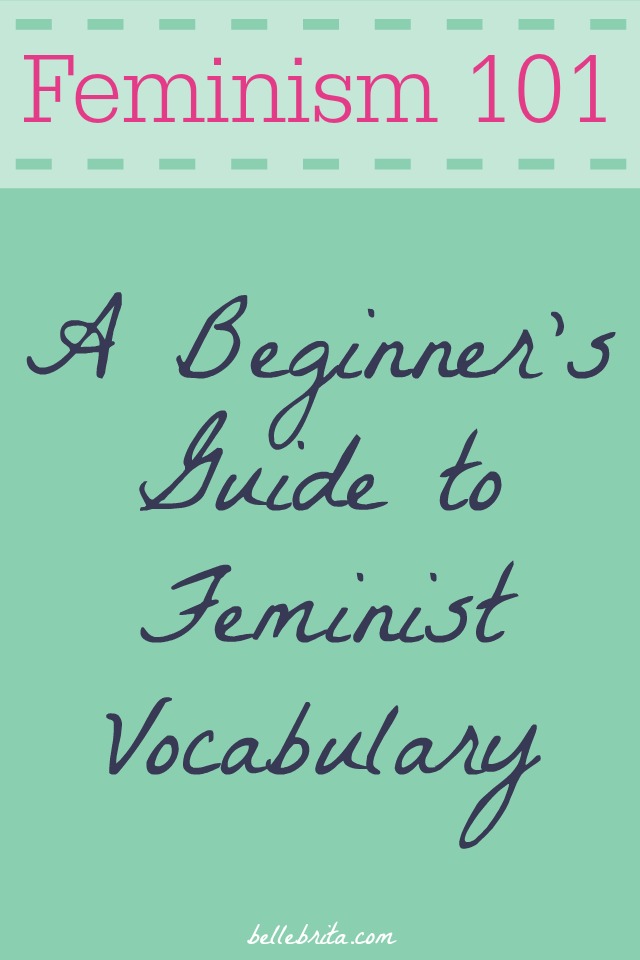 This is hardly an exhaustive list of feminist vocabulary, but it’s a start. I will explore many of these concepts in further detail in future posts. For now, I just wanted to put together a Feminism 101 glossary so that readers won’t be confused in future posts. I know I’ve already used some of this vocabulary in previous posts, and I use them frequently on social media.

If you have any questions, feel free to ask me in the comments. Just know that I might not choose to provide a full answer in the comments if I already plan on addressing that topic in a future blog post.

Fellow feminists, if you have a suggestion for me to add to my feminist vocabulary, please comment below! I especially appreciate suggestions with sources.

Reading has always been my favorite hobby. Ever since the pandemic started in 2020, I've leaned into … END_OF_DOCUMENT_TOKEN_TO_BE_REPLACED

On March 10, 2022, I received an unexpected email from LinkedIn. Normally Gmail sorts these into … END_OF_DOCUMENT_TOKEN_TO_BE_REPLACED

You are so gorgeous. The words hit me quickly, quietly. Panic rose up in my throat even as I … END_OF_DOCUMENT_TOKEN_TO_BE_REPLACED