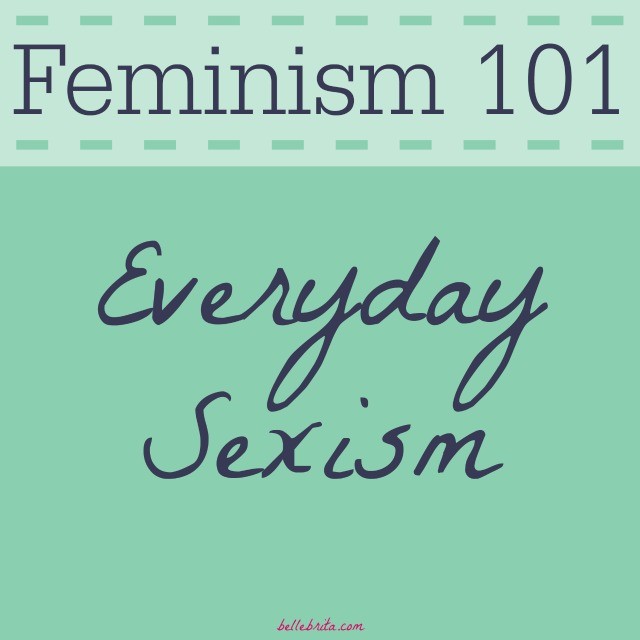 I know a feminist dictionary might seem like a weird choice for my first Feminism 101 post. But everyone has to start somewhere, and I really wanted my readers to understand the difference between two easily confused words.

Misogyny and sexism are not exactly the same thing.

Misogyny is intentional. It is deliberate and often malicious.

Sexism, however, is often unintentional. Benevolent sexism, in fact, is often mistakenly considered to be a good thing.

This difference is important to understand when discussing feminism. I think that some people feel personally attacked, like their motives are being questioned, when feminists point out sexism. Trust me, unless I’m accusing you of misogyny, I’ll give you the benefit of the doubt that you have good intentions, even when you’re kind of being really sexist and ignorant.

Today’s post is inspired by Marielle at This Flooded Sky and Kiersten at She is Fierce, for their second installment of The F-Word today. They asked how I have experienced sexism in my everyday life.

So how does everyday sexism affect me?

In my own life, everyday sexism primarily falls under one of two categories. Language and expected gender roles.

I don’t really give a flying fuck how egalitarian you think you are, but if you are using gendered insults, like slut or cunt, you are a sexist asshole. Even if you are using those insults against men. I seriously don’t understand how, in 2014, a person could still be so ignorant as to think that gendered slurs don’t ever hurt women or perpetuate the sexist attitudes against women.

I have to deal with this shit all the time, and it frustrates me to no end. Men who otherwise seem to respect women and treat women as equals and accept me as a feminist remain completely oblivious to why gendered slurs are a problem.

By the time I graduated high school, I had already lost count of the number of times I had been called a slut. It was fairly common knowledge that I hadn’t even kissed a guy yet, but I had committed the unforgivable sin of having breasts, and thus I had to be punished.

American society has more or less agreed that racial slurs are wrong. And yet even otherwise progressive men continue to use gendered slurs.

Racial slurs would not be tolerated or defended, but the use of sexist language was acceptable. Which, by my calculations, means that if you’re lambasting a black male public figure, calling him a stupid n—-r is out of bounds, but calling him a stupid cunt is totally cool.

I’d like to point out it’s a trade-off which insulates other black men against collateral debasement, but just debases black women in a different way, along with their sisters of all colors. I’m sure that’s just a coincidence. Ahem…

Read the entire post “On Bitch and Other Misogynist Language” at Shakesville. Seriously. It explains the problem with gendered slurs so much more articulately than I can.

I have to deal with this kind of language online and in person on a weekly, sometimes daily basis. It is frustratingly the most common and frequent form of everyday sexism that I experience.

The other type of everyday sexism I often experience is the sexist expectations other people have of me because I’m a woman. This has only gotten worse since getting engaged and then getting married. It’s like all the progress I made with my circle of friends, family, and acquaintances in seeing me as an independent, intelligent, feminist woman halfway disappeared when I became romantically involved with Dan.

It is sexist when you…

I won’t apologize for using strong language in this post. When I face these forms of sexism in person, I smile sweetly while politely explaining the problem. I usually want to swear in response to gendered slurs and sexist remarks, but I hold my tongue. This is my blog, however, my little space on the Internet to be 100% honest about how incredibly offensive and inappropriate way too many people in my life have been and continue to be.

How do you experience sexism? How do you respond to it? Let me know in the comments.

Reading has always been my favorite hobby. Ever since the pandemic started in 2020, I've leaned into … END_OF_DOCUMENT_TOKEN_TO_BE_REPLACED

On March 10, 2022, I received an unexpected email from LinkedIn. Normally Gmail sorts these into … END_OF_DOCUMENT_TOKEN_TO_BE_REPLACED

You are so gorgeous. The words hit me quickly, quietly. Panic rose up in my throat even as I … END_OF_DOCUMENT_TOKEN_TO_BE_REPLACED