It’s been a few months since I last covered a topic under Feminism 101. It’s been even longer since my post explaining rape culture. If you need a reminder, I recommend you reread that post before continuing with Purity Culture.

As a Christian feminist, however, I feel called to critique certain practices and attitudes within Christianity. Specifically, I highlight problems that disproportionately harm women. Purity Culture is one of these problems. 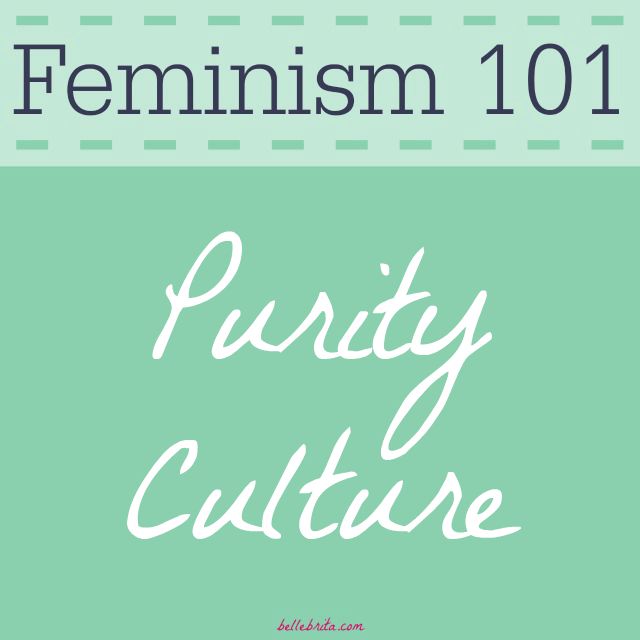 Before I explain what Purity Culture is, and why Christian feminists oppose it, I want to say very clearly what I am NOT critiquing.

I am NOT critiquing:

For a refresher, this is how I defined Purity Culture in my list of feminism vocabulary.

the view of any discussion of things of a sexual nature outside of the context of heterosexual marriage as taboo; adherence to a strict heteronormative lifestyle that forbids most physical contact with significant others, as well as engaging in self pleasure, or holding lustful thoughts about another person that is not a spouse; includes an insistence on female modesty and responsibility to shield boys and men from sexual temptation

Premarital Sex: Is It A Sin Or Not?

The Issue of Premarital Sex

On Why the Bible is Not Clear

Entire books have been written about purity culture, including Damaged Goods by Dianna E. Anderson and The Purity Myth by Jessica Valenti. As with all of my Feminism 101 posts, I hope to cover all the main points of Purity Culture, but for brevity’s sake, I cannot go into too much detail.

Purity Culture relies on making young people feel so terrified of sex that they won’t ever want to have it.

Purity Culture doesn’t differentiate between sexual, biological reactions and dehumanizing/objectifying another person (aka lusting). An erection is not a sin. An orgasm is not a sin. But you wouldn’t know that from Purity Culture.

Furthermore, premarital sex is apparently the one unforgivable sin. No one talks about greed, or materialism, or gluttony, or even sexual assault (I’m looking at you, Josh Duggar) quite the way they talk about premarital sex.

Stop me if any of these metaphors seem familiar. Having premarital sex is like being a:

Supposedly, these metaphors apply equally to both men and women. (Transgender people, or genderqueer people, or intersex people, or anyone else who doesn’t identify as male or female don’t exist in Purity Culture). But none of the metaphors involve two pieces of gum chewing each other or two roses poking thorns at each other. In each metaphor, there is an object that is acted on. If one person having premarital sex is completely ruined for life, what about the other person?

Sex, growing up, was often described in these violent, one-sided metaphors that objectified at least one sex partner (usually these analogies were subtly or not-so-subtly aimed at women–have you ever heard a man talked about as a precious flower/rose?) and left that objectified partner a hopelessly destroyed mess that no one would ever want to be with.

Women are ruined. They’re damaged goods. They lost their purity.

Men stumbled in their walk. They messed up. They made a mistake.

Purity culture’s targets are young women. Young men are simultaneously a focus and an afterthought. Every motivation behind staying pure is focused on being received well by a future husband, but those same future husbands are more easily forgiven for transgressions, written off with “boys will be boys.”

This isn’t the only double standard.

3) Men as sex maniacs, and women as sexless gatekeepers

“Teenage boys only want one thing.”

How many times have you heard that? So all teenage boys want sex, all the time.

Again, an erection is a biological response to stimuli. While teenage boys might have frequent erections (often in completely innocent and awkward situations, or so I’ve been told), that doesn’t mean they actually want to have sex every single time they get an erection.

Teenage boys deal with a lot of the same problems teenage girls have. Doing well in school, trying to fit in, pleasing their parents, hanging out with their friends, wanting to be cool. Honestly, guys should be offended at their sex-crazed caricatures within Purity Culture.

Yeah, that latter statement is almost a direct quote of advice I heard as a late teenager.

Teenage girls have sex drives too. Pretending otherwise can lead them to feel confused, alone, or ashamed of their sexuality.

Female-centric conversations about sex are all about saying, “No.” But what if they want to say, “Yes”?

4) Consent is absent from the conversation

It is absolutely important to empower young people to say, “No” when they feel uncomfortable about a situation. But that shouldn’t be a gendered conversation. Teenage boys need to learn they can turn down sex as well. All young people need to know both how to ask for and how to give consent for when they DO want to engage in sexual activity.

Consent doesn’t enter conversations about sex within Purity Culture. You can only say, “No,” before you’re married… But you have to say, “Yes,” once you are married.

Sarah Moon has written a great review of Christian dating books. In one blog post, analyzing Real Marriage, she writes (emphasis hers):

The book equates not-having-sex-with-your-husband, even while healing from trauma, with disobeying God. To say no to your husband is to be selfish and sinful.

In fact, the book lists “Ways We Are Selfish Lovers.” One of these ways is to “Only have sex when we both feel like it at the same time.”

One unique Christian twist on rape culture is not differentiating between consensual premarital sex and rape. Dianna E. Anderson writes this:

As I read numerous dating guides for research for my forthcoming book, I noticed a pattern with the stories of virginity loss and ruined purity – a significant number of them were stories of rape. In the Abstinence Clearinghouse’s pro-abstinence only education book, Abstinence 101, many of the stories cited are fairly clear cut stories of rape. Even further, in that same text, rape is cited as a direct consequence of divorcing love and commitment from sex – which is their phrasing for premarital sex of any kind.

Rape is simultaneously unrecognizable and a constant threat in purity culture. The simple truth of it is that, without consent education, the purity movement makes it impossible for people to recognize rape as such. Many conservative evangelical will adamantly declare that they are against rape, they think it’s a horrific crime, in the same breath as saying that a wife who denies her husband sex is failing to do her duty. Purity proponents end up promoting rape because they don’t know what consent and healthy sexuality actually look like.

With the high standards women must meet in both clothing and behavior, if they do experience sexual assault, victim-blaming ensues. After all, if dressing and acting a certain way keep men under control, then if a man lost control, it’s clearly the woman’s fault.

While reviewing the book Dateable, Sarah Moon reveals (emphasis hers):

Dateable contains the most blatant animalization of men. They compare men to Pavlov’s dogs, horses, cavemen, and multiple times refer to the “male species,” as if males are somehow a species other than human. This is done, not to degrade men necessarily (although such words certainly might have that effect) but to excuse any inappropriate  behavior they show toward women. Young women are told, concerning men:

Standards for women are simultaneously so high and so complicated that it’s almost impossible for us to follow them.

LGBTQ+ people do not exist within Purity Culture. Everything I’ve summarized so far has been the different messages men and women receive about women and men. Purity Culture assumes everyone is straight and cisgender.

Dianna E. Anderson came out in 2014 as a bisexual woman. This led her to question Purity Culture in new ways.

In seeking to preserve the “covenant of marriage” by encouraging purity, the purity movement also implies that marriage is not for people outside the cisgender, heterosexual norm. Healthy sexual ethics don’t apply if you’re not straight and cisgender – LGBT people don’t exist in the world of purity culture.

This then begs the question: if your gospel-based sexual ethics only apply to a specific subset of the population, what does that say about the love of God which is said to be for all peoples? If your Gospel is only applicable to white, middle-class, American, straight, cisgender Christians, it’s not much of a gospel.

Even for cisgender women who are heterosexual, following Purity Cultures guidelines for biblical womanhood are next-to-impossible. Consider these common quotes.

Will someone please tell me what these vague guidelines mean for my wardrobe?

My boobs are pretty much impossible to hide, so does that mean I should live in baggy t-shirts and sweaters? Except, wait, then how do you know I’m a classy woman?

While the strict heteronormativity is harsher for women, it still hurts men. There’s so much talk about being “real men” and remembering when “men were men.” Men always pursue women. They’re natural-born leaders. They must be the breadwinner.

My book review of Damaged Goods

Future Husbands: Your Future Wife Does Not Belong to You

I don’t want to hear your arguments about why premarital sex is totally a sin. It’s a moot point to this discussion. Read the resources linked in the beginning and argue with them.

If you have any comments or questions regarding Purity Culture, I’d love to hear them!

If you have a question regarding something specific I wrote, and there’s a link in that paragraph, please read that link first. It probably answers your question! If you disagree with any of my points, I’d also appreciate if you read any links in that section before leaving your comment. Don’t forget to go over my comment policy!

Reading has always been my favorite hobby. Ever since the pandemic started in 2020, I've leaned into … END_OF_DOCUMENT_TOKEN_TO_BE_REPLACED

On March 10, 2022, I received an unexpected email from LinkedIn. Normally Gmail sorts these into … END_OF_DOCUMENT_TOKEN_TO_BE_REPLACED

You are so gorgeous. The words hit me quickly, quietly. Panic rose up in my throat even as I … END_OF_DOCUMENT_TOKEN_TO_BE_REPLACED