But aside from the definition I listed in my Feminism 101 glossary, what is privilege, and what is it not? 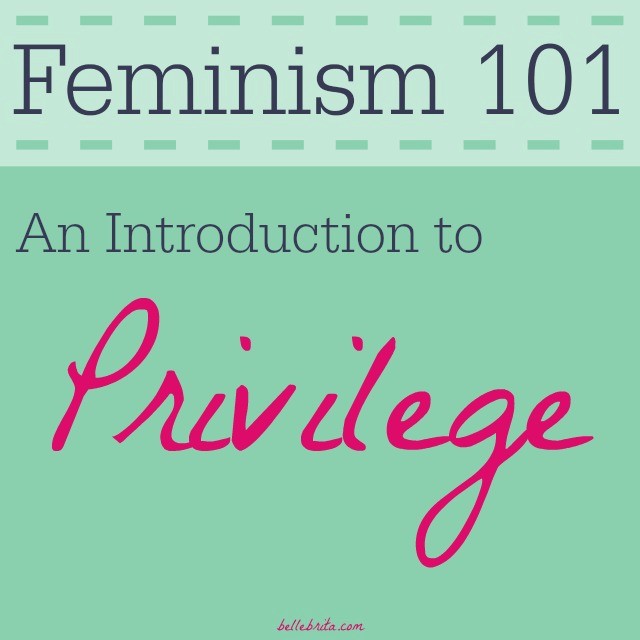 Most of the time, privilege is something you’re born with. You either have it or you don’t.

The benefits of privilege tend to be invisible, which is why it can be so difficult to acknowledge it or even realize you have it. Peggy McIntosh wrote a famous essay in 1988 called “White Privilege: Unpacking the Invisible Knapsack.” This essay was my first introduction to the concept, and I highly recommend you read the entire thing at the link. In it, McIntosh explains how her experiences with male privilege led to her understanding of white privilege. [Emphasis mine].

Thinking through unacknowledged male privilege as a phenomenon, I realized that since hierarchies in our society are interlocking, there was most likely a phenomenon of white privilege which was similarly denied and protected. As a white person, I realized I had been taught about racism as something which puts others at a disadvantage, but had been taught not to see one of its corollary aspects, white privilege, which puts me at an advantage.

But having white privilege means that I benefit from a system that implicitly favors me, whether I want it to or not.

John Scalzi explained it another way, through the metaphor of a video game. If life were a video game, the lowest difficulty setting is playing as “Straight White Male.”

This means that the default behaviors for almost all the non-player characters in the game are easier on you than they would be otherwise. The default barriers for completions of quests are lower. Your leveling-up thresholds come more quickly. You automatically gain entry to some parts of the map that others have to work for. The game is easier to play, automatically, and when you need help, by default it’s easier to get.

This doesn’t mean that you don’t face challenges, or that other people without your privilege can’t become more successful than you. Playing the game of life as “Straight White Male” means that when all else is equal, life is easier for you.

Scalzi followed up that viral article with some of the common responses he received. I love his final paragraph, short and to the point.

You wrote the article and pointed out the straight white men live life on the lowest difficulty setting. Okay, fine. What do I/we do next?

Well, that’s up to you, isn’t it? What I’m doing is pointing out a thing. What you do with that thing is your decision.

That said, here’s what I do: recognize it, and work to make it so the more difficult settings in life becomes closer to the one I get to run through life on — by making those less difficult, mind you, not making mine more so.

Let’s look at my life as an example. Just a reminder, this is an introduction to privilege, so this is a very simplistic overview of how privilege (or lack thereof) has benefited me or hindered me.

My privilege: I am white, middle-class, educated, in a heterosexual marriage.

My lack of privilege: I am a woman with Crohn’s Disease.

One of my greatest accomplishments is that I worked in France for two years after graduation. I spent months looking for my first job, and it took interviews with three French families to finally be hired as an au pair.

So how did privilege affect my jobs in France?

Educational privilege: My French degree helped me get both my job as an au pair and then my job as an English Teaching Assistant.

White privilege: Most of the teaching assistants, including for other languages, were white.

Lack of male privilege: I experienced frequent sexual harassment in France, plus men sexually assaulted me on three separate occasions.

Lack of able-bodied privilege: I was hospitalized with Crohn’s problems in January 2010, in the D.C. area, en route to Paris after two weeks at home for the holidays.

In different ways, my life circumstances benefited me or hindered me through no efforts or fault of my own. This is just a single example of how privilege works in America (and in France).

What to Do with Privilege

All righty, you’ve read this blog post AND all the links to outside sources. I predict one of three reactions:

You can’t possibly have privilege because of reasons. Life is really hard, so you don’t have privilege. You couldn’t get a girlfriend in high school, or you didn’t get into Harvard, or you recently lost your job, or you drive a beat-up car. Did you actually read all the outside sources linked in this blog post? You can be privileged in some areas and not in others. For the record, I listed examples that apply to Dan or me. We’re still privileged.

You’re a horrible person because of factors you can’t control. You swear you’re a good person, and you’d feel a whole lot better if someone lacking your privilege would reassure you of your innate goodness. Snap out of it. Reread my paragraph on NOT feeling guilty. If you really need to discuss your feelings, talk to someone who shares your privilege.

You acknowledge that you have some forms of privilege while realizing you also lack it in other areas. You hate that some people are marginalized in our society, which sometimes includes you, and you want to do something about it. Where do you begin? Yes! This is the best response!

I guest-posted at She Is Fierce with 10 Steps Towards Being a Better Feminist. Three of those suggestions can be slightly adapted here.

Feminism 101: An Introduction to Intersectionality (related)

Subsequent posts will go more into depth on specific types of privilege, but I figured I should introduce a topic I casually mention every day. PLEASE if you have any questions, ask me. Just the other day, a dear friend asked me about privilege and guilt, because some people had really twisted the feminist message to hurt her. If this is truly your first introduction to this topic, it’s totally normal to be confused. I’ve spent years reading up on it in my free time, after taking five WGS courses in undergrad, and I’m STILL learning. I’m happy to help in whatever way I can to other feminists still learning.

Reading has always been my favorite hobby. Ever since the pandemic started in 2020, I've leaned into … END_OF_DOCUMENT_TOKEN_TO_BE_REPLACED

On March 10, 2022, I received an unexpected email from LinkedIn. Normally Gmail sorts these into … END_OF_DOCUMENT_TOKEN_TO_BE_REPLACED

You are so gorgeous. The words hit me quickly, quietly. Panic rose up in my throat even as I … END_OF_DOCUMENT_TOKEN_TO_BE_REPLACED