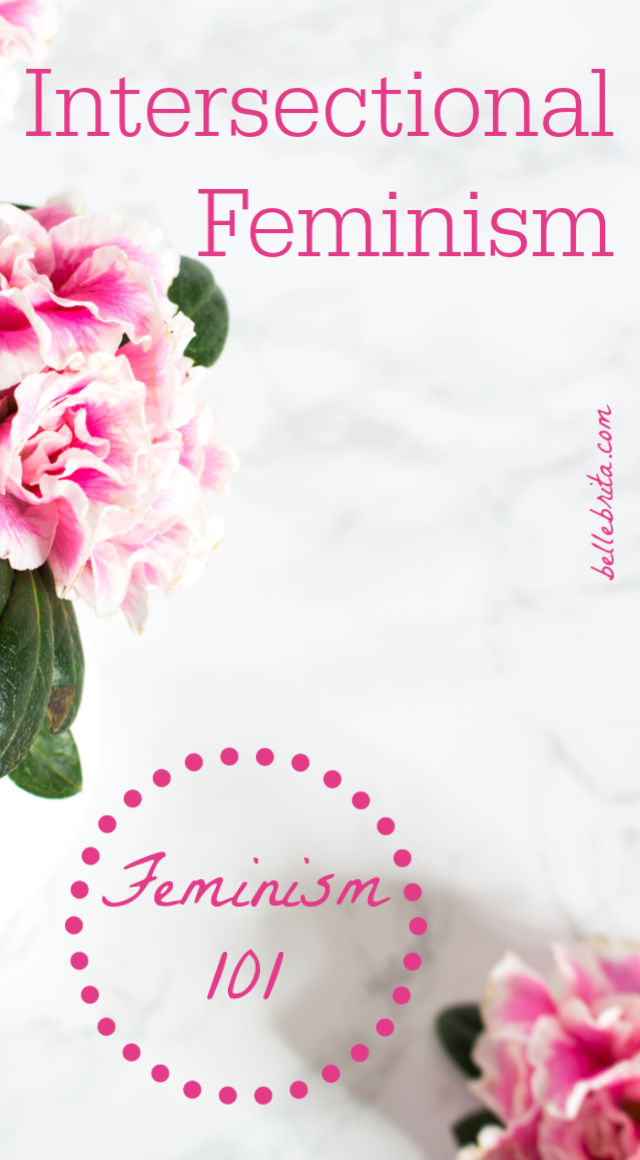 Let me be straight with you.

I have been trying to write this post for months.

I just didn’t know where to begin. As a relatively privileged feminist, I really want to do this topic justice, without attempting to speak for other women.

So before I delve into this, I give this humble request to any feminist readers.

Please comment or even contact me privately if you disagree with my explanation of intersectionality. Help me learn more. Help me grow as a feminist.

In my Feminism 101 Glossary, I used the following definition for intersectionality:

Concept often used in critical theories to describe the ways in which oppressive institutions (racism, sexism, homophobia, transphobia, ableism, xenophobia, classism, etc.) are interconnected and cannot be examined separately from one another; first came from legal scholar Kimberlé Crenshaw in 1989.

I am still learning the history of intersectionality in general and reading up on Crenshaw’s work, specifically. In this 2014 piece from NewStatesman, Crenshaw explains that the concept of intersectionality is not new (and was not, when she coined the term in the 1980s), but that’s beside the point. According to Crenshaw:

Intersectionality draws attention to invisibilities that exist in feminism, in anti-racism, in class politics, so obviously it takes a lot of work to consistently challenge ourselves to be attentive to aspects of power that we don’t ourselves experience.

If you really want extra credit, read her paper “Mapping the Margins: Intersectionality, Identity Politics, and Violence Against Women of Color.” Even just the introduction (which I read) is a great summary of the theory of intersectionality.

If you remember from the Feminism 101 Glossary, I included “patriarchy” in my list of vocabulary. In sum, it refers to a social organization in which men are disproportionately in power. For example, when your Congress is made up of 80% men, you live in a patriarchal society.

Kyriarchy is like an intersectional patriarchy. Elisabeth Schussler Fiorenza defines it as:

Kyriarchy is best theorized as a complex pyramidal system of intersecting multiplicative social structures of superordination and subordination, of ruling and oppression.

Basically, a kyriarchy is a social organization in which privilege is relative between two people and dependent upon the situation. For example, in some situations a white woman has more privilege than a black man. In other situations, the privilege is reversed.

Y’all still with me? I never said Feminism 101 would be easy!

This section is the reason I have hesitated for so long in writing this piece. I am honestly still not sure how I feel about the usage of the word “intersectionality” within feminism. I do not know where I should stand as an ally, as a white feminist who does not want to be a White Feminist.

Is intersectionality a way to look at the specific discrimination faced by women of color, that is, the intersections of primarily racism and sexism?

Or is intersectionality a way to look at any intersection of prejudice, including but not limited to: classism, ableism, homophobia, racism, and sexism?

In my research, I came across an awesome blogger who explained matter-of-factly why intersectionality is not for white women, even if those women are poor, or transgender, or otherwise marginalized. To paraphrase her, when you are a white woman, even if you have to deal with other forms of oppression, your whiteness means you will always deal with that oppression differently than a woman of color.

On the other hand, at Everyday Feminism, in “Why Our Feminism Must Be Intersectional (And 3 Ways to Practice It),” the authors critique White Feminism, but do not suggest intersectionality is only for women of color.

But without an intersectional lens, our movements cannot be truly anti-oppressive because it is not, in fact, possible to tease apart the oppressions that people are experiencing. Racism for women of color cannot be separated from their gendered oppression. A Trans person with a disability cannot choose which part of their identity is most in need of liberation…

In short, intersectionality is a framework that must be applied to all social justice work, a frame that recognizes the multiple aspects of identity that enrich our lives and experiences and that compound and complicate oppressions and marginalizations. (bolding and links original)

I could quote from different writers and websites on the different perspectives of intersectionality all day. I think this particular disagreement is a prime example of how feminists don’t always agree, even on the big issues.

Some might argue this is all just semantics. As long as you’re addressing multiple forms of oppression, does it matter what you call it?

I am Not an Intersectional Feminist

How exactly does one proceed when feminists disagree?

Intersectional feminism isn’t about me, but it can be about how I interact with other women.

It reminds me to listen to their stories, to amplify their voices, but never to presume to speak for them.

I can smash the kyriarchy without co-opting a term not originally intended for me.

On March 10, 2022, I received an unexpected email from LinkedIn. Normally Gmail sorts these into … END_OF_DOCUMENT_TOKEN_TO_BE_REPLACED

You are so gorgeous. The words hit me quickly, quietly. Panic rose up in my throat even as I … END_OF_DOCUMENT_TOKEN_TO_BE_REPLACED

On the morning of December 2, 2021, Dan and I arrived at Northside Hospital around 5:20am. The … END_OF_DOCUMENT_TOKEN_TO_BE_REPLACED