There is seriously SO much confusion about what is (and is not) rape culture. Due to this, some people act like it’s just something feminists made up. Misandry is totally real, y’all. 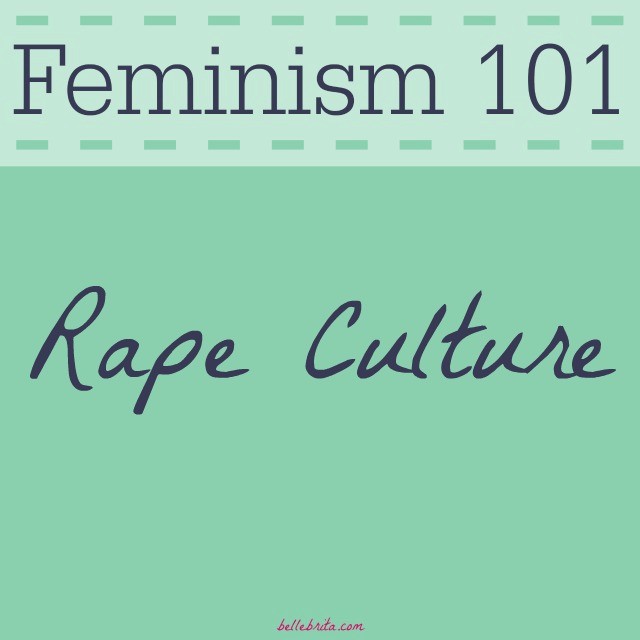 What rape culture is NOT

If I say you’re contributing to rape culture, that does not mean I think you’re a rapist. You can be complicit in rape culture without sexually assaulting anyone.

What is rape culture?

As I defined in my Feminism 101 post on vocabulary, rape culture is “a society in which rape is pervasive and normalized due to societal attitudes about gender, sex, and sexuality.”

In layman’s terms, the United States fosters a rape culture because:

How do other feminists define rape culture?

Rape culture is telling girls and women to be careful about what you wear, how you wear it, how you carry yourself, where you walk, when you walk there, with whom you walk, whom you trust, what you do, where you do it, with whom you do it, what you drink, how much you drink, whether you make eye contact, if you’re alone, if you’re with a stranger, if you’re in a group, if you’re in a group of strangers, if it’s dark, if the area is unfamiliar, if you’re carrying something, how you carry it, what kind of shoes you’re wearing in case you have to run, what kind of purse you carry, what jewelry you wear, what time it is, what street it is, what environment it is, how many people you sleep with, what kind of people you sleep with, who your friends are, to whom you give your number, who’s around when the delivery guy comes, to get an apartment where you can see who’s at the door before they can see you, to check before you open the door to the delivery guy, to own a dog or a dog-sound-making machine, to get a roommate, to take self-defense, to always be alert always pay attention always watch your back always be aware of your surroundings and never let your guard down for a moment lest you be sexually assaulted and if you are and didn’t follow all the rules it’s your fault.

Shakesville is a really awesome resource for learning more about feminism. If you already know everything in my 101 series, she takes everything further. I highly recommend you read her entire 101 piece on rape culture and not just the excerpts above.

To understand rape culture better, first we need to understand that it’s not necessarily a society or group of people that outwardly promotes rape (although it could be).

When we talk about rape culture, we’re discussing something more implicit than that. We’re talking about cultural practices (that, yes, we commonly engage in together as a society) that excuse or otherwise tolerate sexual violence.

We’re talking about the way that we collectively think about rape.

More often than not, it’s situations in which sexual assault, rape, and general violence are ignored, trivialized, normalized, or made into jokes.

It frequently includes objectifying women or portraying social relations as a “war of the sexes,” both of which lead to dehumanization. Dehumanization, in turn, leads to sexual violence against victims being condoned as they are mentally considered “objects” instead of “a fellow human…”

This same dynamic of the dehumanization of femininity contributes to defensive homophobia and violence by men against men perceived to be insufficiently masculine. By cultural definition, male victims of rape have been feminized and, just like female victims, are thus erased, ignored ,or deemed unimportant.

How have you contributed to rape culture?

If you have EVER called a person a slut, a pussy, a whore, a cunt, a faggot, or a bitch, you have contributed to rape culture.

If you have ever watched someone use that language and didn’t say anything, or worse, you laughed, you have contributed to rape culture.

If you have ever suggested a rape survivor could have prevented their rape, you have contributed to rape culture.

If you have ever asked a woman about “the message sent by her clothes,” you have contributed to rape culture.

If you have ever said that women have a responsibility to cover up our bodies so men are not tempted to lust, you have contributed to rape culture.

If you have ever suggested that a person is “ruined,” or “damaged goods” for having premarital sex, you have contributed to rape culture.

If you have ever forced a child to hug or kiss a friend or family member, you have contributed to rape culture.

Rape culture in my life

Pretty much everyone I know, including myself, has done one of the things listed above at least once. I’m not writing this to guilt anyone. I want to point out how incredibly insidious rape culture is within the States.

Each of these situations might not seem like much on their own. However, when combined, they paint a terrifying picture of societal attitudes regarding gender roles, sex, and power.

Sexual harassment is a common form of rape culture.

By the time I graduated high school, I had already lost count of the number of times I’d been sexually harassed. That’s how pervasive sexual harassment has been in my life.

More than that, not a single person ever said a word about my harassment. No one told my harassers to stop. No one suggested that what they were saying to me was inappropriate.

Just so we’re clear, if someone is:

that person is sexually harassing you. If you see someone doing any of this to someone else, that is sexual harassment, and you should speak out against it.

How you can combat rape culture

Everyone can work to dismantle rape culture. The easiest change is to STOP any of the behaviors listed above. If you do those things, stop doing them. If you see someone act that way, call them out or talk to them about it privately.

There is a really great organization called Men Can Stop Rape. I highly recommend checking out their resources.

Join me in stopping rape culture

Together, we can make a difference.

I honestly believe that.

But we can only change the world if we first realize the world needs to change.

As always, if you have any questions, please ask below. If you have not commented before, read my Comment Policy.

I included more than two dozen links to additional information. While I do not expect you to read all of them, please read some of them before demanding proof of my arguments.

I moderate comments. I feel very comfortable blocking anyone not engaging in good faith.

Reading has always been my favorite hobby. Ever since the pandemic started in 2020, I've leaned into … END_OF_DOCUMENT_TOKEN_TO_BE_REPLACED

On March 10, 2022, I received an unexpected email from LinkedIn. Normally Gmail sorts these into … END_OF_DOCUMENT_TOKEN_TO_BE_REPLACED

You are so gorgeous. The words hit me quickly, quietly. Panic rose up in my throat even as I … END_OF_DOCUMENT_TOKEN_TO_BE_REPLACED