Last Saturday, between 3.3 million and 4.6 million people around the world participated in the Women’s Marches. This is possibly the largest day of demonstration in US history.

Honestly, the sheer number of people willing to demonstrate their commitment to women’s rights astounds me. I feel incredibly encouraged by the success of last weekend. I didn’t march for unimportant reasons, but I’m proud of all my friends and family members who did so. 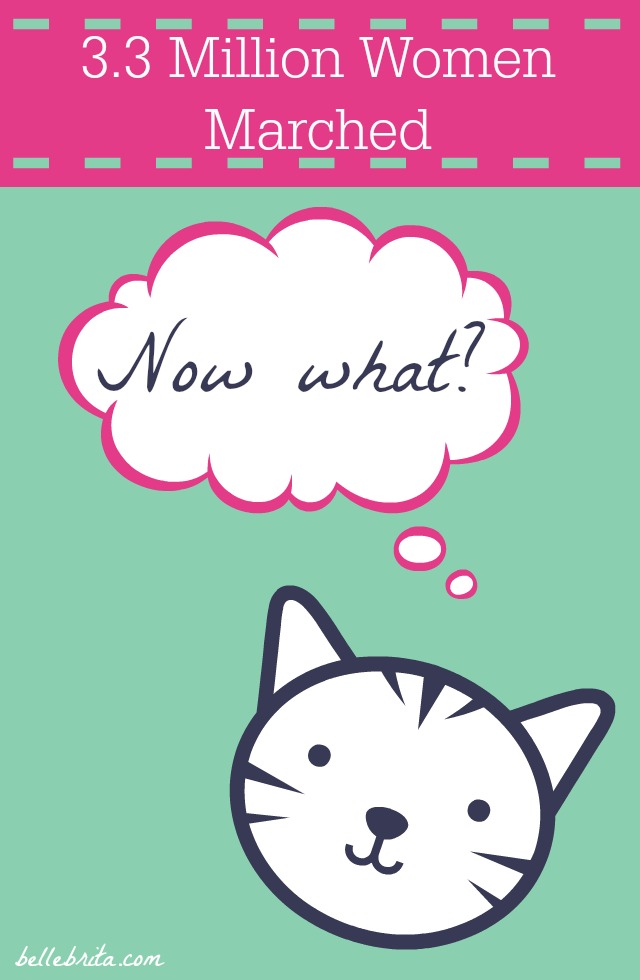 What is your next course of action?

Will you start calling your senators and representatives every week?

Will you donate to nonprofit organizations that do feminist work?

Are you going to show up at the next #BlackLivesMatter protest? What about a LGBTQ+ protest?

Joining the Women’s March is an awesome jump into feminist activism. But we cannot stop there.

I know how overwhelming it feels to navigate all your options. I’ve read many reactions on Facebook to the Women’s March, and I’ve sorted those reactions accordingly into action steps. Find the group that best matches your description. Pick from the suggested action steps.

I’m a white woman who marched. I’m new to feminism.

Welcome to feminism! The journey to gender equality is long and messy, and you can choose from many paths to work your way there. Here are a few ideas to stay involved:

What do you know? What do you still need to learn? Here are a few suggestions on how to start learning about feminism.

What’s your main feminist concern? Find a nonprofit for it. Look it up on Charity Watch or Charity Navigator, although those websites might not rate all small nonprofits or global nonprofits. Here are a few ideas to get started.

Fact-check what you post before tweeting or sharing to Facebook. Yes, liberals fall for fake news too. Don’t become part of the problem. I like to verify a story with three separate sources before I share the link with the most detailed (and best-cited) information.

I post almost everything publicly. You have my blanket permission to share my words with credit. However, if your Facebook friend writes something particularly striking, ask for permission before you share it. If she only shares it with friends, you will need permission to copy and paste the text into a new post if you want your friends to see it.

Learn why other feminists criticized the Women’s March:

Look, I totally get why you’re so excited about the Women’s March. Over 3 million people! Demonstrating for gender equality! Woo!

But there were some real problems worthy of criticism. Don’t take the criticism personally. Use it as an opportunity to learn and to grow.

Also, remember that feminists are not a monolith. That includes groups within feminism. The following links are helpful perspectives, but not all intersectional feminists agree with all criticisms of the Women’s March.

The Women’s March on Pittsburgh, and Why Our Feminism Must Be Intersectional

The Women’s March on Washington: A Lesson in Intersectional Failures

Doubts about inclusive feminism have little to do with the Women’s March. They’re rooted in history.

Woman in Viral Photo From Women’s March to White Female Allies: ‘Listen to a Black Woman’

I’m a pro-life feminist offended by the Women’s March.

So… let’s discuss whether or not you’re actually a feminist. I wrote the following as a comment on Sarah Bessey’s Facebook page.

I’m fine with pro-life feminists who morally oppose abortion without wanting to make it illegal.

But a pro-life feminist who just wants to make abortion illegal is not a feminist. Reproductive choice is possibly the greatest right women need in order to control our own lives. And if that’s not something a woman considers necessary, she has a lot of unchecked privilege.

Do you agree with me? Great, keep calling yourself a pro-life feminist and skip ahead to your action steps.

Do you disagree with me? Do you think it’s fine and dandy to identify as a feminist while trying to make abortion illegal? Then I have some reading assignments for you.

Roe is About Women’s Rights

The Pope, Pregnant Children, and Violence Against Girls and Women

Safe and Legal Abortion is a Woman’s Human Right

Can you be a “pro-life feminist”? The Women’s March on Washington offered some insights.

Furthermore, take a look at the website for New Wave Feminists. Do you see any calls for comprehensive sexual education? Where’s the information on contraception? I skimmed through their blog as well, and the posts I read didn’t contribute anything positive to feminism. The one good thing I found is the idea for an app to help women find free and low-cost health services. That’s a great idea, and I hope it comes to fruition.

The Women’s March initially included New Wave Feminists as sponsors, but understandably removed them. Reproductive rights are critical to feminism. Anti-choice women should not sponsor a movement with legitimate concerns about reproductive rights.

Or you could donate to any program in your community helping single/low-income mothers.

I didn’t march. American women are whining. Women in other countries have real problems.

Privilege means not recognizing a problem exists because it doesn’t affect you personally.

I highly encourage you to keep reading.

But please. Tell me again that American women have zero problems.

So. You genuinely opposed the Women’s March because women in other countries face real misogyny. Let’s pretend I believe you.

Do something about it.

Educate yourself some more:

Feminists already exist in other countries. They don’t necessarily need a bunch of white women swooping in to save them. Take the time to read what they have to say.

Women in Saudi Arabia: Western feminists won’t save us – their bullying ignorance reduces us to mere hymens

Afghan Women: What the West Gets Wrong

Sonita, The Feminist Afghan Rapper Fighting Against Child Marriage, Will Give You Chills

I’m offended by the pussy hats.

Were you offended by Donald Trump bragging about sexually assaulting women? “Grab them by the pussy,” he said.

Also, you know the pussy hats were a play on words… right? They were pussy cat hats. The pink hats were not vaginas. They were cats.

Regardless of whether or not I marched, I’ve been involved in feminism for awhile now.

Great! Then you already know how much work we still need to do.

The resources above should help you with conversations with other people new to feminism or critical of feminism.

Believe it or not, this is actually a short list of resources and action steps. Not to belittle my hours of research, my 2,000ish words, and my 40ish links to additional sources.

However, I wanted to provide easy choices to stay involved with feminism. We are all at different places in our feminist journeys. We all have the capacity to learn and to grow. I hope this blog post inspires you to take action in your own community, even if that community is online.

And hey, it’s okay to take a step back too and practice self-care. Remember, self-care is radical too!

Did you march? Why or why not?

P.S. I tried to vet all nonprofits/organizations that I recommended for donations. However, I couldn’t independently verify each of them for effectiveness. I encourage you to look into their programs before donating.

Reading has always been my favorite hobby. Ever since the pandemic started in 2020, I've leaned into … END_OF_DOCUMENT_TOKEN_TO_BE_REPLACED

On March 10, 2022, I received an unexpected email from LinkedIn. Normally Gmail sorts these into … END_OF_DOCUMENT_TOKEN_TO_BE_REPLACED

You are so gorgeous. The words hit me quickly, quietly. Panic rose up in my throat even as I … END_OF_DOCUMENT_TOKEN_TO_BE_REPLACED