I was diagnosed with Crohn’s Disease more than 25 years ago, at just 8 years old. While my parents tried to shield me from some of the scarier aspects of living with an Irritable Bowel Disease, I eventually realized that I might need surgery one day. Specifically, I’ve known for almost 20 years that I might need a small bowel resection. 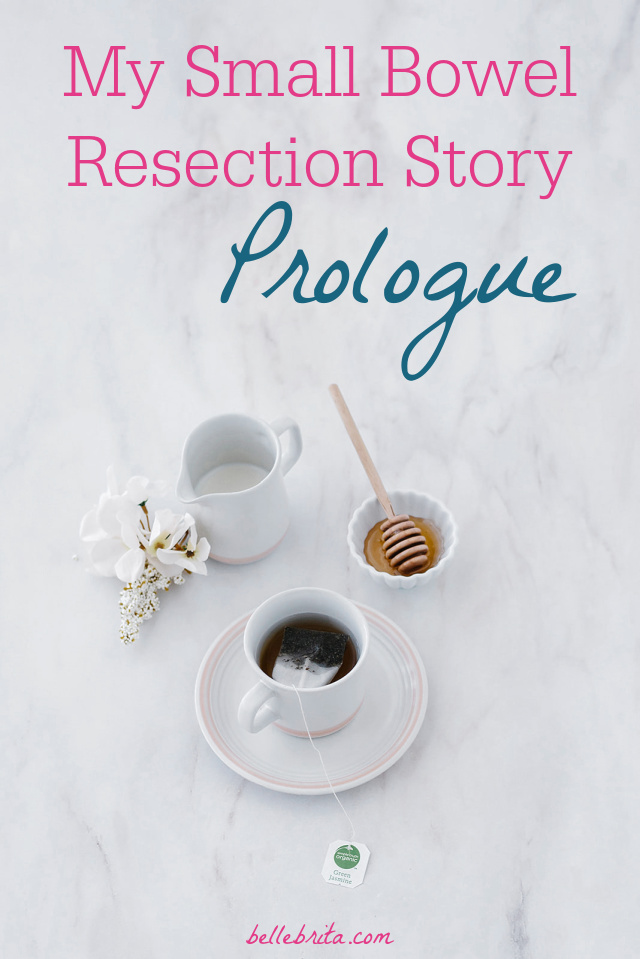 I started seeing my current gastroenterologist in May 2015. I had gotten really sick, after years of my own neglect. After examining the results from my colonoscopy and my first MRE with contrast, Dr. Quijano gave me three choices… sort of.

Related: Learning to Forgive Myself

I started taking Remicade. My appetite returned, I reached a healthy weight, and my energy levels improved. I talked to my primary care provider about pregnancy, and I started taking prenatal vitamins. While Dan and I had initially agreed to start trying for a baby around our second wedding anniversary (March 22, 2016), we realized the necessity of waiting until I had my follow-up colonoscopy and MRE with contrast. A minor setback to our plans–just a few months.

But my May tests ended up being delayed when I developed a nasty staph (bacterial) infection AND a simultaneous fungal infection. My Remicade infusion was also delayed. I went 12 weeks between treatments instead of the usual 8 weeks.

After two rounds of antibiotics (which made my fungal infection worse), and steroid ointment, my skin was finally healed enough for my colonoscopy and MRE with contrast.

My tests showed improvement in my inflammation… But I had developed a stricture in my small intestine where some inflammation had receded. A stricture is an abnormal narrowing of a body passage. Mine was caused by scarring from the inflammation.

Dr. Quijano gave me more bad news: I was still too sick for a healthy pregnancy.

After my appointment, I sat in my car and wept for a long time.

I didn’t realize it then, but this is when my depression started.

Slowly my body stopped responding to the Remicade. Even when I started getting my infusions every 6 weeks, my symptoms were bad again. Like clockwork, I would experience severe abdominal pain and constant vomiting for 24-72 hours at some point in the week prior to a new infusion.

I responded well to Entyvio, but I was impatient. I wanted to heal sufficiently for a pregnancy.

In January 2018, I started experimenting with diets for Crohn’s Disease. I cut out most insoluble fiber (roughage), a diet I still follow today. I also cut out all grains except for white rice. Complementary treatments, not alternative medicine.

At this point, I was having an MRE with contrast roughly every 6 months to evaluate my inflammation, my stricture, and my dilation. The dilation formed above the stricture where digested food would back up, pushing against my small intestine and widening it.

After a year on Entyvio, and about 7 months on my diets, my stricture and my dilation both showed improvement. Unfortunately, my inflammation remained unchanged. I was still too sick for a pregnancy.

If I remember correctly, this is when I first asked about surgery. Dr. Quijano explained that since I was responding well to the Entyvio, surgery wasn’t necessary yet. He also thought I would do better receiving my infusion every 6 weeks instead of every 8 weeks because my body metabolized the medication quickly.

Unfortunately, around this time, Dan and I started a fierce battle with health insurance.

I went 14 weeks between treatments. My mental health plummeted. I started seeking help for my depression.

Initially, I visited a mental health facility that was clearly reliant on public funding. I chose them because the outdated information online indicated I could see a female psychiatrist there. During the six months of treatment, I saw two distinct psychiatrists and two distinct therapists.

When I asked the first psychiatrist if I could drink alcohol while on my antidepressant, he treated me like an alcoholic… Even after I explained my upcoming trip to California, where I wanted to enjoy local wine with dinner.

My second therapist routinely interrupted me to talk about himself.

I found another mental health facility, one that only accepts private insurance. I still go there, almost three years later. While I have seen two therapists there, and I’m figuring out my third, I’ve been with the same nurse practitioner of psychiatry the entire time. I’ve been pleased with the level of care I receive, and I’m disheartened that patients with Medicaid or Medicare have so few options in our area.

Eventually, everything was arranged for a nurse to visit me at home to administer my Entyvio infusions. I also slowly reintroduced grains to my diet, since that didn’t help me.

Unfortunately, the gap in treatment caused a huge setback in my progress. Even getting my infusion every 6 weeks wasn’t sufficient. My doctor prescribed it to me every 4 weeks, which involved another health insurance battle. (Luckily this battle was resolved more quickly).

I remember flying home from Ohio in early January 2020. My Crohn’s hit me so bad that I threw up multiple times at the airport, on the airplane, at the airport, and one final time in the car on the drive home.

Dr. Quijano explained that it was time for me to pursue new treatment. I had my initial Stelara infusion at the hospital. Then I started getting injections every 8 weeks. My sweet husband Dan initially gave my injections, but eventually I found nurses to administer the medication. (This involved a lot of red tape and health insurance hassles).

Once again, my body metabolized the medication too quickly, so for awhile I received Stelara every 6 weeks, and now I receive it every 4 weeks.

Over the summer, I had my 5-year colonoscopy and another MRE with contrast. I received some good news. My inflammation had finally decreased to mild. With this improvement, Dr. Quijano told me that I could have a healthy pregnancy, although it would still be a high-risk pregnancy…

BUT my stricture still existed.

After years of biologics, my stricture was only slightly improved. A reversal was unlikely. However, patients can live with a stricture as long as symptoms aren’t interfering with their quality of life. My pandemic weight gain certainly proved that my body was doing okay!

At this point, Dr. Quijano explained my options.

Why I Chose a Small Bowel Resection

I chose to have a small bowel resection primarily for two reasons:

For most people, insoluble fiber is part of a healthy diet. Foods like beans, nuts, whole grains, raw vegetables, berries, and more all contain insoluble fiber. Avoiding these foods helped me rest my stricture and heal my dilation. However, I miss having a balanced diet. I miss having easy access to healthy snacks.

By removing my stricture, I can slowly add insoluble fiber back to my diet.

Any pregnancy in someone with Crohn’s Disease is a high-risk pregnancy. Even while in remission, we are statistically more likely to face pregnancy complications like miscarriage, premature labor, and complications in labor/delivery. That said, patients with Crohn’s can take steps to minimize that risk.

As already mentioned, patients can live with a stricture. However, we are always at risk of a bowel obstruction… And, if you’re an obsessive researcher like I am, then you know that a bowel obstruction during pregnancy can lead to fetal death and/or maternal death.

By removing all damaged parts of my small intestine, my body will better tolerate a pregnancy.

I’ve shared the last few years of my Crohn’s Disease journey to the best of my recollection. I cannot promise that every date is accurate, but the dates are close. Everything major is highlighted, but I skipped many of the recurring details.

Add in COVID, and people callously admitting that I should just accept death as the price to pay for the economy.

These past 6 years have just been… a lot.

Coming up next will be a post about my actual surgery and my hospital stay.

Reading has always been my favorite hobby. Ever since the pandemic started in 2020, I've leaned into … END_OF_DOCUMENT_TOKEN_TO_BE_REPLACED

On March 10, 2022, I received an unexpected email from LinkedIn. Normally Gmail sorts these into … END_OF_DOCUMENT_TOKEN_TO_BE_REPLACED

You are so gorgeous. The words hit me quickly, quietly. Panic rose up in my throat even as I … END_OF_DOCUMENT_TOKEN_TO_BE_REPLACED