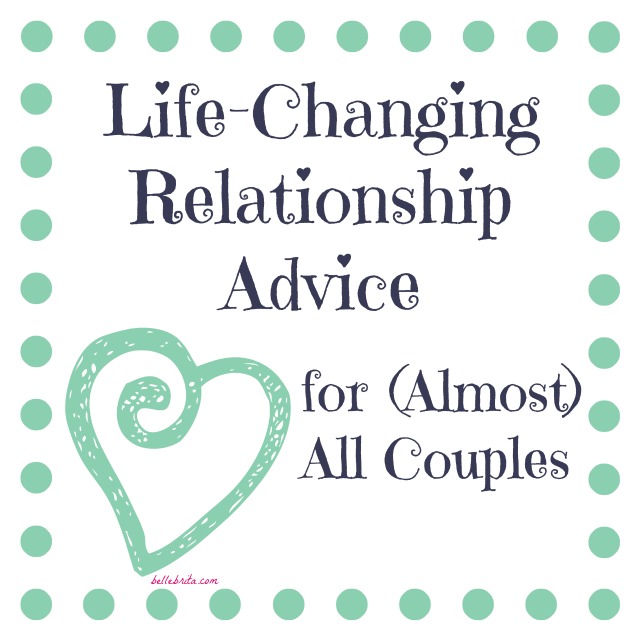 I did not mean to go almost two months without sharing my secrets for good relationship advice. “Can We Just Stop with the Bad Relationship Advice Already?” went up on January 19th, and it’s almost halfway through March already… Oops.

Good Relationship Advice that (Almost) Anyone Can Use

Don’t compare your relationship to anyone else’s.

Two different couples can have happy, healthy relationships that look nothing alike.

Basically, just like each individual is unique, each relationship is unique!

Discuss your communication style with your partner.

For example, Dan told me very early on that he does not pick up on cues. I need to tell him very specifically how I feel and what I want him to do. I do not drop hints. I don’t make passive-aggressive comments. If I am upset due to his actions, I spell out what he did, my understanding of why he did that, how I feel, why what he did resulted in me feeling that way, and what I need him to do in the future. I had to learn how to do that, but it has made a huge difference in our relationship.

For his part, Dan has learned to let me talk longer. There were times at the beginning that he would interrupt me, and I would put my hand over his mouth to stop him. If he’s not sure whether or not I’m done talking, he asks me.

You and your significant other can avoid a lot of heartache and miscommunication by learning the best way to communicate with each other.

This is another tip that’s on many lists, but the suggestion doesn’t go far enough. Usually it’s related to jealousy issues–trust your partner not to cheat. Yes, trusting each other’s fidelity is important. But trust is so much bigger than that.

Trust each other’s intentions. Going back to Dan and me, even when his action upsets me, I always give him the benefit of the doubt in why he did something. (Hence the step on explaining my understanding of why he did something). I trust that his intentions are always good, even if the actions are misguided. I trust that he is always considering me when he makes decisions, even if I disagree with his decisions. I actually think this is a key part of why we rarely fight, even if we work through disagreements often.

I’m actually working on a whole post on compromise, but I wanted to mention this here. Compromise is absolutely a key component of relationships. But you should never compromise your values, your beliefs, or anything that is key to who you are. You might not love every compromise you make in a relationship, but you should feel confident and comfortable making each compromise.

What would you add to my list? What good relationship advice do you know that you think would be applicable to most couples? Share your thoughts in the comments! And stay tuned for some BAD advice on everyone’s favorite topic: SEX!

You are so gorgeous. The words hit me quickly, quietly. Panic rose up in my throat even as I … END_OF_DOCUMENT_TOKEN_TO_BE_REPLACED

On the morning of December 2, 2021, Dan and I arrived at Northside Hospital around 5:20am. The … END_OF_DOCUMENT_TOKEN_TO_BE_REPLACED

I was diagnosed with Crohn's Disease more than 25 years ago, at just 8 years old. While my parents … END_OF_DOCUMENT_TOKEN_TO_BE_REPLACED