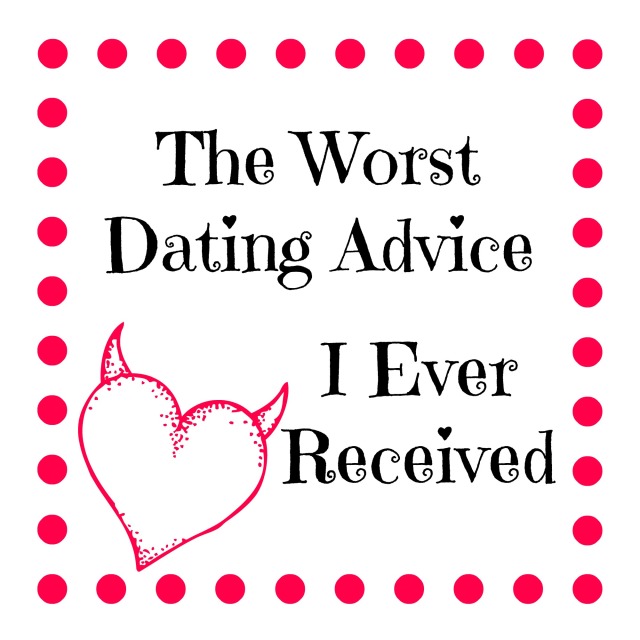 I’ve received a lot of well-meaning, but extremely misguided relationship advice over the years. At first, I thought it was just me. If you only know me through my blog, then you might not realize that I married my first boyfriend. I was perpetually single until I met him, just a few months after my 24th birthday. So clearly something was wrong with me since I couldn’t land a man, and thus I needed all this bad dating advice… right?

Nope. The more I venture out into the blogosphere, the more horrified I am by all the incredibly shitty and harmful advice not just about dating, but also about relationships, sex, and even marriage. I’m pretty sure if I had followed any of the advice thrown at me (and now rampant throughout the blogosphere), I’d either be in a convent by now or stuck in a miserable marriage.

With any luck, you are not peddling this bad relationship advice. With even more luck, you have not been on the receiving end of it.

I already wrote an entire article on this line of advice a few years ago, so I won’t reinvent the wheel. But can we please stop telling women to be someone they’re not, just to snag a man? Guess what. I’ve stayed ME during all my interactions with potential suitors, and I found one to marry. I wasn’t the right person for other men, and that’s okay. It’s more important that I stayed true to myself, and I waited until I found a man who could love me for ME.

You deserve a perfect man who will spoil you rotten and treat you like a princess.

Having standards is absolutely a good thing. Being picky can be a good thing. But while most people deserve common courtesy and respect, women are not automatically entitled to an independently-wealthy man who is tall, dark, and handsome and who checks off every single one of your itemized demands.

Dan is not fluent in French, he’s not from the South, and he thinks Greek life has something to do with the struggling economy of Greece. I still went on a first date with him, and then a second, and then many more.

I didn’t win him due to my mere existence as a woman. I had something to offer. He was attracted to my independence, my intelligence, and my nerdy cute looks. When we started dating, I put forth an effort that matched his own. I didn’t just passively wait for him to do all the work. There is more to finding a good man that being just a woman.

Your parents and brothers must approve of a guy before you even have a first date.

Don’t get me wrong, I totally support the rights of parents to set their own house rules regarding dating for their underage kids. No dating until 16? Fine. Only group dates, with pre-approved activities? No problem.

But why is this advice always so gendered? I’m pretty sure teenage boys are not more discerning of their dates than teenage girls. I’m also pretty sure that my brothers are not a better judge of character than I am. While I didn’t date in high school, if I had, my brothers’ opinions would have been completely irrelevant.

Finally, while it’s fairly normal for parents to want to meet the date of their teenager, male or female, I’ve occasionally found this sort of mandate for adult women. So… she’s old enough to vote, to go to college, to drink alcohol, to support herself financially, but not to pick her own date?

Ladies, if you are a grown-ass woman, but literally not competent enough to judge on your own if a man is good enough for a FIRST date, then you should not be dating. Figure out your life and your dating priorities before jumping back into the dating scene.

You have to stop looking to find someone.

When is this advice appropriate? I’m not sure if ever. I received it when I was single but interested in guys who thought of me as “just a friend.” (Totally their prerogative, but they missed out, JUST SAYING).

I have many talents, but turning off my feelings on demand is not one of them. How ridiculous would it be if someone told me today, “Dan will love you more if you just stop caring about him so much”? While I was far from “in love” with any of my past crushes, I couldn’t just eliminate my feelings for them in the hope that the right guy would magically ask me out.

While I did meet and fall in love with Dan when I was completely uninterested in a relationship, I was still looking for men to date casually. I was still making an effort. I was just doing so with the intention of having fun and meeting cool people. The universe laughed at me, and I met my husband.

There are many variations on this particular nugget of bad dating advice, one of which Katie tackles with her typical humorous, blunt honesty.

Stay tuned for when I share dating advice that doesn’t suck, plus some of the worst advice I’ve heard on relationships, sex, and marriage.

May the 4th be with you... Yes, I'm a Star Wars nerd and proud of it. Note: I wrote this post … END_OF_DOCUMENT_TOKEN_TO_BE_REPLACED

I just want to blog about nothing and everything right now, so... Whatever Wednesday! Please enjoy … END_OF_DOCUMENT_TOKEN_TO_BE_REPLACED

Y'all. It's been a minute. Or roughly 6 months. I've taken blogging breaks before. I even … END_OF_DOCUMENT_TOKEN_TO_BE_REPLACED