I touched on Modesty Culture in both my post on why I wear a bikini and in my 101 post on Purity Culture.

Modesty Culture is NOT an individual’s choice to wear modest clothing according to their own convictions or comfort level. Nor is it necessarily related to professional dress codes or school dress codes (although it can be). 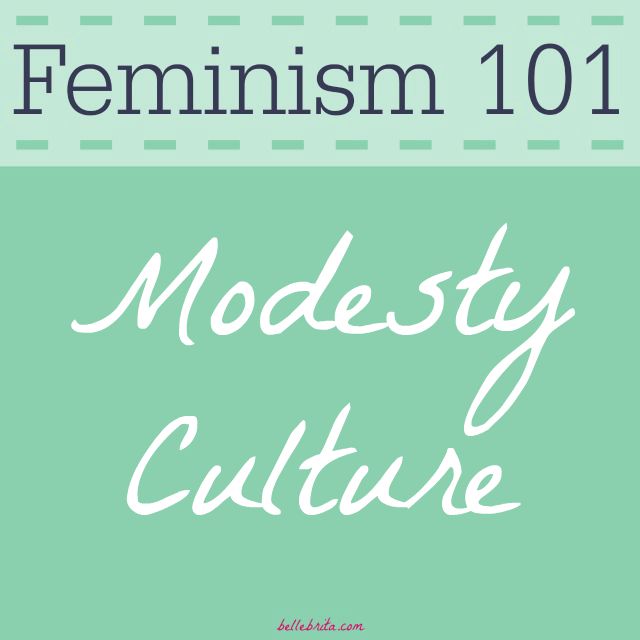 Remember the key components I shared of Purity Culture?

All of these are present in Modesty Culture.

I use a few words or phrases that you might not know to explain Modesty Culture. While some of this vocabulary might be familiar, keep in mind my definition when reading the rest of this post.

Stumbling Block: According to Wikipedia, “In an idiomatic usage in the Hebrew Bible and the New Testament, a stumbling block is a behavior or attitude that leads another to sin.” The Bible refers to stumbling blocks in several passages.

A few are popular for Modesty Culture, 1 Corinthians 8:9 and Romans 14:13. Both passages talk about food. Long story short, some new Christians in the early Church felt that eating certain foods was a sin, even though Paul explains that all food is okay for Christians. So Paul says that if you’re hanging out with those new Christians, then you should follow their eating habits.

Modest is Hottest: This is a pithy slogan that attempts to woo young women into dressing modestly. It’s essentially a response to the idea that modest clothing must be frumpy. Unsurprisingly, it misses the point.

Lust: Lust is a sin. Lust usually isn’t defined very well. Lust ends up being anything sexual outside of marriage. To quote The Faulty Definition of “Lust:”

Basic sexual desire and arousal has now been deemed “lust.” And, for the normal young teen boy (and young teen girl, for that matter – if we are honest), the ordinary results of puberty have now been labeled “sin.”

For the child of Christian Patriarchy, “lust” means any sexual feeling or desire. (Except that felt for one’s wife in marriage.)

Who can live under the idea that natural, biological urges are evil?

And then to compound it by insisting that feeling sexual arousal is the same as committing adultery or a sexual assault?

Defraud: Let’s take a look at the Gothard definition. (This is the school of thought followed by the Duggars).

To defraud another person is to stir up in them desires that cannot be righteously satisfied. A woman can defraud a man by the way that she dresses, talks, or acts. A man can defraud a woman by improper touching or by talking about a marital commitment that he is not able or intending to carry out.

Any sexual thought or sexual reaction outside of marriage is lust.

Avert your eyes. Pray with an accountability partner. Just do your best to ignore all attractive beings of the opposite sex. Guard your heart so you don’t stumble in your walk.

But if you do stumble, it’s not totally your fault, because…

Women always and only dress with men in mind. They’re supposed to dress to protect men, but they usually dress to tempt you.

It’s a woman’s responsibility to dress modestly. You alone get to decide if her clothing is modest or not. If it’s not, according to you, then clearly she intentionally wore provocative clothing to tempt you into lust.

It’s your duty as a Christian to chastise her, gently, for her sin. Pray about it first. Then talk to her and blame her for your lust. Even if that lust was just a fleeting sexual thought. That’s a sin, don’t forget.

For encouragement in your walk, consider these direct quotes from young Christian men.

If a girl flaunts herself, it changes everything about what I think of her. To start with, I automatically assume she is not a Christian or is not taking her walk with Christ seriously (I might even try witnessing to her). If she is a Christian, I’ll probably tell her that she is being a sexual distraction (much more gently, of course). If you flaunt yourself, you have the attention of lots of guys, but you instantly lose their respect and admiration. I would never consider courting a girl that advertises her body like a product. (Age 17)

It’s not their body to flaunt. It belongs to Christ and their future husband. How dare they flaunt something that God did not permit them to flaunt? How dare they write a check the Bible doesn’t allow them to cash? When a girl purposely flaunts her body, she is almost immediately ruled out for anything beyond acquantenance [sic] in my eyes. (Age 22)

I feel they need to be rebuked. I feel that they are self-consumed…or consumed in the world. Their standard of living, dressing, etc…isn’t that of the Word, but of the world. (Age 25)

For more on what Modesty Culture teaches men:

You are responsible for men’s lust because they can’t help themselves.

Men are actually the weaker sex. Women are so strong that we don’t even have sex drives until our wedding day. So you have to do everything you can to keep men from lusting after you.

You must wear modest clothing. Otherwise men will lust after you. You must not stretch your arms or lean over in front of men. They will lust if they see your abdomen or your cleavage. You should not engage in any physical activity that could cause your breasts to move. Men lust if they notice breasts at all.

If a man lusts after you, you have sinned too.

You should always consider the weakest of your brothers in Christ. You don’t want to be a stumbling block to any man, ever. If a man lusts after you, that’s your fault. Thus you have sinned. You should have prevented his lust. This is totally biblical and not at all misconstrued.

A man’s opinion of your appearance is the only thing that matters.

Confused by what to wear? Don’t worry! A bunch of Christians got together and asked 1600 teenage boys to share their thoughts on modesty. Many of them were home-schooled. None of them were pre-screened for having a healthy understanding of sexuality. But their opinions can help you pick a modest wardrobe!

Modest is hottest! Modest doesn’t have to mean frumpy. Just remember that if you accidentally don’t meet the modesty standards of every single man you ever meet, one of them will lust after you. And you will have sinned.

Modesty is a heart issue… Which you demonstrate through your clothing.

You must wear your heart on your sleeve. Modesty is all about your relationship with God, your love for your Christian brothers, and your inner conviction to dress a certain way. Men know your heart based on what you wear. So make sure you dress according to every man’s standards.

But don’t take my word for it. A few young men have graciously shared their thoughts on your heart.

If a girl purposefully flaunts her body she loses her right to ask guys to stop looking at her like something to be had. When you flaunt your body by wearing tight clothes, low-cut shirts, short skirts and underwear that sticks out of your clothes, then you are asking to have guys stare at you. We are visual. When we see skin we look. When we see cleavage or underwear, our imagination takes over. Girls, have some dignity about yourself and don’t flaunt your body and then wonder why you can’t get any respect from people. (Age 19)

Girls who purposely flaunt their bodies will get no respect from me. I would not want to have a girlfriend, or get married to somebody like that, because there are other men looking at her and thinking impure thoughts about her. Those other men may also tempt her and she may become unfaithful. (age 18)

For more on what Modesty Culture teaches women:

My Feminism 101 posts always end up so long! This is just an introduction to the topic. I will write more in the future! Until then, I encourage you to check out my Modesty Culture Pinterest board.

Just a reminder that if you totally disagree with me or have a question, you should read some of the included links before leaving a comment. They provide evidence that I’m not just making stuff up, and they’ll probably answer most of your questions.

On the morning of December 2, 2021, Dan and I arrived at Northside Hospital around 5:20am. The … END_OF_DOCUMENT_TOKEN_TO_BE_REPLACED

I was diagnosed with Crohn's Disease more than 25 years ago, at just 8 years old. While my parents … END_OF_DOCUMENT_TOKEN_TO_BE_REPLACED

I felt like another brain dump, so here's my second installment of Whatever Wednesday. Note: post … END_OF_DOCUMENT_TOKEN_TO_BE_REPLACED