A few weeks ago I wrote the most politically-neutral post I will possibly ever write. And it still leaned feminist libertarian, because that’s how I roll. Today, however, and next week, I appeal to Democrats and to Republicans to think outside the two-party system. I challenge all US voters to research third-party candidates, especially libertarian ones. 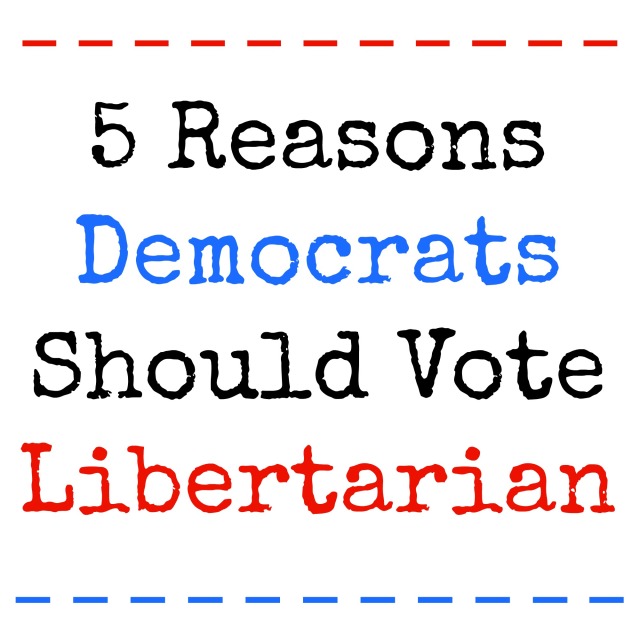 From the official Libertarian Party Platform, as adopted at the 2014 Convention:

Recognizing that abortion is a sensitive issue and that people can hold good-faith views on all sides, we believe that government should be kept out of the matter, leaving the question to each person for their conscientious consideration.

Regardless of how libertarians personally feel about abortion, we don’t believe in unnecessary laws restricting women’s access to abortion.

Contrary to popular belief, libertarians don’t want to legalize marijuana just so we can all get high. Also from the official Libertarian Party Platform:

Criminal laws should be limited to violation of the rights of others through force or fraud, or deliberate actions that place others involuntarily at significant risk of harm. We favor the repeal of all laws creating “crimes” without victims, such as the use of drugs for medicinal or recreational purposes, since only actions that infringe on the rights of others can properly be termed crimes. Individuals retain the right to voluntarily assume risk of harm to themselves.

The enforcement of current drug laws disproportionately affects men of color. “Although rates of drug use and selling are comparable across racial lines, people of color are far more likely to be stopped, searched, arrested, prosecuted, convicted and incarcerated for drug law violations than are whites.” The repeal of certain drug laws is not enough to eliminate the racism in our criminal justice system, but it would be a start.

We support the maintenance of a sufficient military to defend the United States against aggression. The United States should both avoid entangling alliances and abandon its attempts to act as policeman for the world. We oppose any form of compulsory national service.

Let’s not forget the many Democratic senators and representatives who voted FOR the Iraqi invasion. Who was the sole “Republican” to vote AGAINST it? Libertarian Ron Paul. 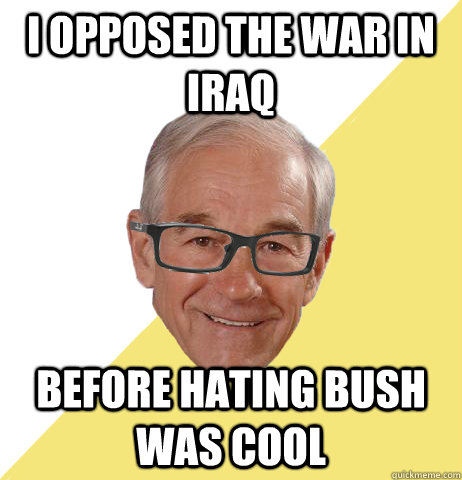 I must mention that while most libertarians agree on all these ideals, we do differ in how we would implement them. Some libertarians would like to remove the government entirely from marriage. They argue that marriage equality–that is, the extension of federal and state recognition and benefits to same-sex couples–is discrimination against unmarried individuals. Rather than extend such benefits to all married couples, they would remove them from all married couples.

While government-free marriage is certainly my ideal, I think we’re a little too far-gone for that. It’s honestly awkward climbing into the marital bed each night with my husband and Uncle Sam, but it’s too late to change that. As long as the government continues to grant certain rights, protections, and benefits to male-female marriages, they should offer the same legal recognition to same-sex marriages.

From the Libertarian Party Platform:

Sexual orientation, preference, gender, or gender identity should have no impact on the government’s treatment of individuals, such as in current marriage, child custody, adoption, immigration or military service laws. Government does not have the authority to define, license or restrict personal relationships. Consenting adults should be free to choose their own sexual practices and personal relationships.

Who else is tired of all the farm subsidies? All subsidies, actually? (This article lumps together tax credits with actual subsidies, but it is an interesting summary of huge companies getting government subsidies).

Libertarians oppose the government handing out money to companies. One more time, from the Libertarian Party Platform:

We oppose all forms of government subsidies and bailouts to business, labor, or any other special interest.

Depending on your priorities as a Democrat, you might want to consider voting Libertarian this year. I encourage you to look at who is running in your area. Research third-party alternatives. You might just be pleasantly surprised…

What issues matter to you? Have you found candidates who share your ideals?

I ended up not reviewing April's Allure Beauty Box because life got in the way. I actually opened it … END_OF_DOCUMENT_TOKEN_TO_BE_REPLACED

No Buy Style Challenge is back! In case you missed the inaugural blog collaboration, here's how it … END_OF_DOCUMENT_TOKEN_TO_BE_REPLACED