True or false. You only need to vote in the presidential election.

If you live in a red state or a blue state, your vote in the presidential election doesn’t actually matter (unless you vote third-party, which will help future third-party candidates). The rest of your state will overwhelmingly vote Republican or Democrat, so your presidential vote won’t make much of a difference.

The more local the election, the more significant your vote. Local elections can be determined by just a few hundred votes. 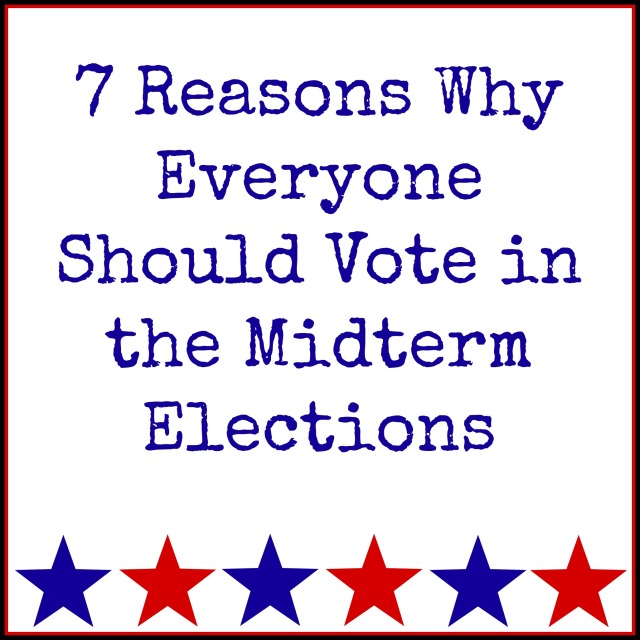 How many articles have you read in the last few years about how irresponsible Millennials are? Well, let’s prove all those grumpy critics wrong! The Millennial vote could be a deciding factor in close elections. If you want politicians to care about you as a constituent, you need to vote.

Young women are Beyonce Voters. We only care about Uncle Sugar. We aren’t interested in the economy or immigration reform.

Unlike presidential candidates, who must appeal to their respective very liberal and very conservative Democratic and Republican bases, candidates in the Midterm Elections can take moderate stances. In red states, Democratic candidates are fairly moderate. In blue states, Republican candidates are fairly moderate. And third-party candidates actually have a shot at winning local and state elections. In fact, if you’ve been disappointed by your respective big party, it’s never been a better time to vote third-party!

Currently, the Republicans control the House of Representatives, and the Democrats control the Senate. All members of the House are up for reelection, as established in our Constitution. 36 Senate seats are up for election this year, 33 in normal races and 3 in special races. Enough seats in the Senate are toss-ups to change who controls the Senate. Most likely, the Republicans will maintain control of the House, but you never know.

Do you like the legislation that’s been coming out of Congress? How do you feel about the Violence Against Women Act (and the people who voted against it)? Are you concerned about the deficit? Did you approve of the sequester last year?

EVERYONE gets to vote for their local representative to the House, and some of you get to vote for your state senator. Congress proposes and passes the legislation of the land, so VOTE.

White men make up 70% of Congress, but only 37% of Americans. More than 50% of Americans are women, but only 18.8% of Congresspeople are women. People of color are also underrepresented compared to the American population. Find the latest statistics in this report.

The infographic below is from statistics prior to the 2012 election. However, the overall picture has not changed much. Click on the image to expand it. 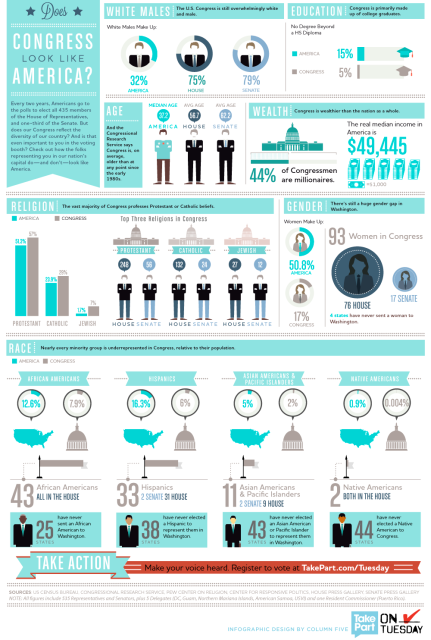 No, we don’t actually vote for judges, but we do vote for the people who pick them. Think about some of the major Supreme Court decisions in the last few years. 2014 has certainly had a few doozies. Just recently, the refusal of the Supreme Court to review several cases on same-sex marriage will lead to the legalization of marriage equality in many new states. The Senate has the power to confirm or block nominations for these positions. What sort of judges do you want presiding?

6) Vote for what matters at home.

North Dakota and Colorado both have measures to restrict or to eliminate state access to abortion. My home state of South Carolina is proposing an amendment on gambling and an amendment on elections.

Both South Carolina and Ohio are electing new governors. Again, your vote for governor will matter a lot more than your vote for president. Although, the Republican incumbents in both my home state and my current state are most likely to win reelection.

And if you’re in Oregon, you get to vote to legalize marijuana!

7) Vote because we’re pretty damned lucky to live in a country that gives us that right.

American women have had the right to vote for less than 100 years. Suffragists were arrested, imprisoned, and even force-fed after their hunger strike. All so women could vote. Women gained the right to vote in 1920 with the 19th Amendment.

Still, many southern states enacted Jim Crow laws throughout the 1900s to keep black men–and later black women–from voting. Most of these were only eradicated in 1965 with the passage of the Voting Rights Act.

While some states and some cities might still put up obstacles to voting, overall, we are lucky to have the right to vote. Don’t take that privilege for granted.

I voted today! Did you? #libertarian #Ohio #Findlay pic.twitter.com/2Zu5um5iim

Will you be wearing your sticker proudly on November 4th? Why are you voting this year?

Reading has always been my favorite hobby. Ever since the pandemic started in 2020, I've leaned into … END_OF_DOCUMENT_TOKEN_TO_BE_REPLACED

On March 10, 2022, I received an unexpected email from LinkedIn. Normally Gmail sorts these into … END_OF_DOCUMENT_TOKEN_TO_BE_REPLACED

You are so gorgeous. The words hit me quickly, quietly. Panic rose up in my throat even as I … END_OF_DOCUMENT_TOKEN_TO_BE_REPLACED