“Marriage is just a piece of paper.”

How many times have you heard that statement? I know I’ve heard it a few times in pop culture, but luckily most of my friends and family disagree with the sentiment. 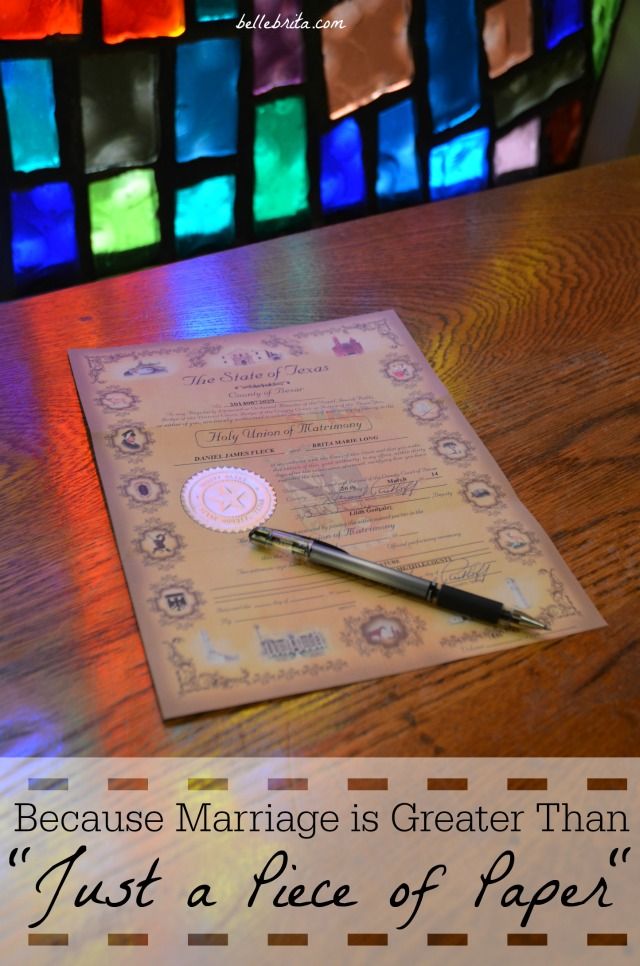 I knew I wanted to marry Dan very early in our relationship. It was still a decision I made carefully, after considerable thought and pre-engagement counseling.

The 1100+ rights, privileges, and benefits granted to Dan and me by the federal government?

Those are the perks of the government recognizing our marriage, but they do not make up our marriage.

Those rights come from “just a piece of paper.” Our marriage license proves the legitimacy of those rights.

The government’s only concern is that Dan and I are both adults who willingly entered into a contract together called “marriage.”

As a practical libertarian, I focus on what is and not what should be. This means that for my entire adult life, I have supported marriage equality. I support the right for adults in same-sex relationships to marry each other in the eyes of the law. As long as the government is handing out rights, benefits, and privileges to some married couples, the government needs to grant the same rights, benefits, and privileges to all married couples.

After the ruling in Obergefell v. Hodges, the United States has finally achieved marriage equality! States can no longer ban same-sex couples from getting married.

As much as conservative Christians would like to argue otherwise, the government institution of marriage has nothing to do with the Christian definition of marriage. According to strict Christian marital beliefs, my parents should have been forbidden to wed (they both have ex-spouses). I shouldn’t be married to Dan, because we’re “unevenly yoked.”

And yet my parents celebrated 30 years together this past December. Dan and I celebrated our first wedding anniversary in March. The government didn’t discriminate against us, despite our marriages not falling perfectly in line with so-called “Christian” beliefs.

Finally, the government can no longer discriminate against same-sex couples who want to get married.

For years, same-sex couples have proven their marriages are just as beautiful, strong, and real as any heterosexual marriage, even if not recognized by the government. Like Jack Evans, 85, and George Harris, 82, of Texas, who finally had the chance to legally tie the knot in Texas. Or like Vivian Boyack and Alice “Nonie” Dubes, who legally wed in Iowa last year after being together for 70 years.

While marriage is greater than “just a piece of paper,” my heart overflows with joy that my LGBTQ+ friends now have access to the legal perks.

After all, that piece of paper–that marriage licence–makes life as a married couple so much easier.

And for some couples, their marriage license might also symbolize their commitment to each other. Just like Dan and I wear rings as symbols of our marriage, a marriage license can be a symbol of everything marriage means to a couple.

In conclusion, I want to quote from the majority opinion in Obergefell v. Hodges.

No union is more profound than marriage, for it embodies the highest ideals of love, fidelity, devotion, sacrifice, and family. In forming a marital union, two people become something greater than once they were. As some of the petitioners in these cases demonstrate, marriage embodies a love that may endure even past death. It would misunderstand these men and women to say they disrespect the idea of marriage. Their plea is that they do respect it, respect it so deeply that they seek to find its fulfillment for themselves. Their hope is not to be condemned to live in loneliness, excluded from one of civilization’s oldest institutions. They ask for equal dignity in the eyes of the law. The Constitution grants them that right.

Do you feel like your marriage is somehow less valid because same-sex couples can get married? (Yes, that’s pretty much not a real question).

What are your thoughts on marriage in the eyes of the law vs. marriage before God? Do you agree with the SCOTUS decision? Why or why not?

100% pure, organic jojoba oil has become a staple in my daily beauty routine. I use it to remove … END_OF_DOCUMENT_TOKEN_TO_BE_REPLACED

I ended up not reviewing April's Allure Beauty Box because life got in the way. I actually opened it … END_OF_DOCUMENT_TOKEN_TO_BE_REPLACED

No Buy Style Challenge is back! In case you missed the inaugural blog collaboration, here's how it … END_OF_DOCUMENT_TOKEN_TO_BE_REPLACED