Like many of my fellow white Christian Americans, I’ve been horrified the last few days watching the riots in Charlottesville, Virginia.

There’s something quite chilling about modern men carrying the Nazi flag.

But that doesn’t compare to the act of domestic terrorism. How else would you describe someone intentionally driving a car into a crowd of people?

Understandably, people of all races, religions, and political affiliations are speaking out against the white supremacists and their message of hate.

But I’ve also noticed a disturbing trend among my fellow white Christian Americans.

Yes, we should condemn the beliefs of white supremacy.

Yes, we should publicly support racial and religious minorities.

But when we distance ourselves from white supremacists, we need to do so without erasing history. 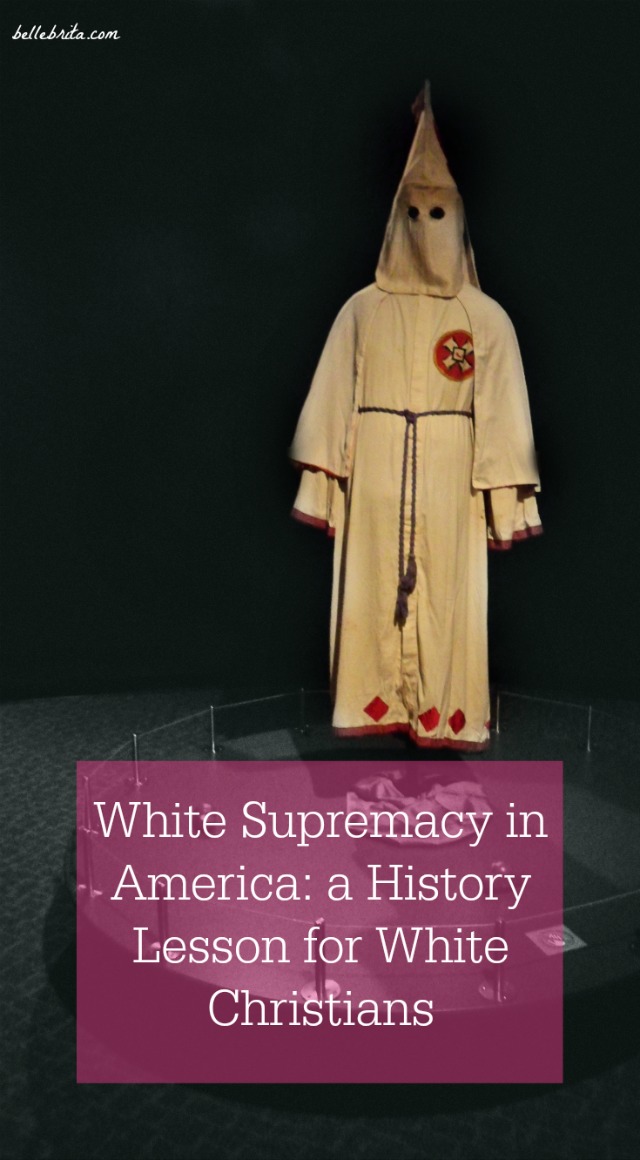 I’ve lost count of how many times I’ve seen this phrase, or a variation of it, on my Facebook feed in the last few days. Several people mention relatives who fought in World War II against the Nazis.

Except American Nazis are real people.

German immigrants, including members of the Nazi Party, founded the Free Society of Teutonia in 1924. The group dissolved in March 1933 only to reform in May 1933 by merging with another group to start the Friends of New Germany. After press criticisms of being unpatriotic, the group reformed as the German American Bund in 1936 to emphasize its American patriotism.

This is a very brief summary of multiple articles I’ll link below.

Let’s look at this.

These were quite literally Nazis who were also proud Americans.

Today, there is still a group called the American Nazi Party, although I haven’t found a clear link between the historical group and the modern group.

Regardless of whether or not modern white supremacists call themselves Nazis, they clearly echo Rockwell. A book review of American Fuehrer: George Lincoln Rockwell and the American Nazi Party summarizes Rockwell’s racist legacy in three ways.

First, Rockwell established the concept of “White Power,” expanding Hitler’s vision of the master race to include Slavs, Greeks, Spaniards and others without Aryan roots — a brilliant and successful gambit in a nation largely peopled by immigrants from all over Europe.

Second, he became “the first postwar American neo-Nazi to appreciate the strategic necessity of Holocaust denial,” and, in fact, succeeded in popularizing the idea that Jews had pulled off a “monstrous and profitable fraud” long before Willis Carto, commonly seen as the father of American denial.

Third, based on a cynical understanding of Americans’ persistent religiosity, Rockwell married the generally atheistic ideology of orthodox Nazism to Christian Identity, a grossly heretical reading of the Bible that describes Jews as biologically satanic and people of color as soulless.

Several of these articles contain descriptions of racism and violence that should be difficult to read. Others also include distressing photos.

American Nazis in the 1930s—The German American Bund – The Atlantic

Disturbing Pictures From The History Of America’s Nazis – Buzzfeed

American Nazi Party Website (visit at your own risk)

No true Christian is a white supremacist

This is less of a direct quote and more of a general sentiment expressed by white Christians all over my Facebook feed.

Again, yes, you should condemn white supremacy. Again, we need to do so without erasing history. Ever since Christopher Columbus accidentally ran into America, white Christian Americans have committed atrocious acts against people of color (POC). That didn’t stop with the American Civil War. Nor did the Civil Rights Movement suddenly change the hearts of all white supremacists.

The following Founding Fathers all owned slaves during their lifetime, although some eventually freed their slaves.

“But they were a product of their time!”

Eh, other Founding Fathers didn’t own slaves. Some of the slave owners listed above freed their slaves and joined the abolitionist movement.

Leading up to the American Civil War, Christian abolitionists and slave owners alike used the Bible to support their positions on slavery.

Proponents of slavery pointed to passages in both the Old and the New Testament that tolerate slavery. They argued that slavery itself is not a sin; only the mistreatment of slaves is a sin.

Abolitionists looked at the Bible as a whole, pointing to verses like Matthew 19: 19 and Galatians 3: 28. They argued that the Bible regulated slavery without tolerating it.

After the South lost, many Christian southerners assumed the loss was God’s punishment for their sin. However, they still didn’t see slavery as their sin–God punished the South for the mistreatment of slaves.

Christians in the Ku Klux Klan

While the first movement was primarily limited to the South, the second movement quickly spread across the nation, with most members living in urban cities in the Midwest and West. The current movement is a splintered group of individual chapters across the country, with no formal structure or organization.

I’m struggling to summarize just how widespread and horrific the acts of the KKK were. They terrorized black people in every way imaginable.

Today most major Christian denominations denounce the KKK, but that doesn’t stop the KKK itself from identifying as Protestant. At the height of its popularity, during the second movement, the KKK counted many Protestant ministers among its members.

The second Klan required its members to be not only white and male but also Christian. Religion became the centerpiece of the second Klan’s platform, and Klansmen showed their allegiance to their faith through church attendance, speeches and writings and the recruitment of ministers as members. Visiting churches to make monetary donations was another method used by Klan members to show their commitment.

I consulted many more sources than the ones listed below.

How and Why Did Some Christians Defend Slavery? – The Gospel Coalition

Why Did So Many Christians Support Slavery? – Christianity Today

The South, the War and ‘Christian Slavery’ – The New York Times

Can Religion Explain the KKK?

This blog post is getting long, and I’m getting depressed the more I read about white supremacy. So I’m just going to quote a few sources rather than attempt to summarize them all.

How “Nice White People” Benefit from Charlottesville and White Supremacy

The vile hate we saw this weekend is enabled by a far quieter refusal to fight against white supremacy and an accompanying willingness to reap its benefits. You can participate in white supremacy without carrying a tiki torch for racism…

For white people who don’t self-identify as disciples of Richard Spencer, David Duke, and/or the ancient demon Beelzebub, there is extreme anxiety around the accusation of racism. We see this fear of blame in Trump’s statement. “Not Donald Trump, not Barack Obama” seems to say, ‘Hey, there’s been a tense racial climate in this country forever. It’s not anyone’s fault!’ Except the opposite is true. American white supremacy has been a problem forever, and it is all of our fault, fellow white people…

To all of the “nice white people,” I say this: Stop furrowing your brow over “the partisan divide,” and loudly declare your position in this fight against hatred. There is no such thing as bias when it comes to white supremacists. To hell with fairness and respectability. Burn politeness to the ground and get vocal. Talk to your friends and family members. Be willing to make sacrifices and insist on taking a stand for what is right. The president is talking about “many sides,” and one of them is white supremacy, so you better make a clear f*cking choice about which side you’re on.

Racism is complex in scope because it is both a mental illness and a value. In other words, it is a valued, sheltered, and protected mental illness. One might even say it has been incubated and allowed to fester throughout the course of American history…

Like alcoholism, an alcoholic cannot thrive without their enablers. It is the same white Americans who enable their relatives and friends who are racist. It is important to identify and recognize that racism is a mental illness and recommend that individual to a psychotherapist as needed.

The culpability of white women

White women sometimes act like we get a pass from racism because we experience sexism. Nope. White men have historically used benevolent sexism of white women as justification for violence against black people. When white women don’t call out this benevolent sexism–or worse, embrace it–we become culpable in upholding white supremacy.

Dear White Women, There Is Nothing Heroic About Not Having Sex With Nazis

White women have always allied with white men, sexually and otherwise. They have willingly invested in the power and stature of white supremacist men in our society, including, for example, Donald Trump.

To assume that the hundreds of white supremacist men who gathered in Charlottesville over the weekend are all single, lonely, and undersexed is to equate racism with unattractiveness. At best, that’s reductive. If we are intent on dismantling hundreds of years of white supremacy, it’s counterproductive.

Stop Telling White Nationalists They “Just Need to Get Laid”

The framing of white nationalism, and fascism, as expressed by men, as being reactionary orientations—or inevitable backlash—against virginity or sexual frustrations is a destructive yet often heard maxim…

After torch-wielding white nationalists marched on the University of Virginia on Friday, chanting Nazi slogans such as “blood and soil,” and later surrounding an outnumbered counter-protest, arguably well-intentioned outsiders watching events unfold began justifiably mocking and satirizing the overwhelmingly male, and all-white march. The most common insults center around virginity, and sex, the latter of which is prescribed as both a threat to and a remedy for their unrestrained white supremacist convictions. But sex will never serve as treatment for racism, and even the most well intentioned jokes reaffirm unsettling patriarchal attitudes which argue that sex, specifically with women, is not only a rite of passage, but has the power to change deep-seated, bigoted views…

Not only are white women having sex with white supremacists, they are actively joining their movements and organising with them…

The weaponization of the construct of virginity, and the wider concept of the attainment of sex as a liberatory, man-making endeavor, has long served as a means to embolden violent masculinity, and foment greater patriarchal control…

Positioning sex as an unmitigated good, and virginity as a direct insult to manhood, is a prevalent attitude that creates a social stratum of sexual power which fosters and even legitimizes violence…

What can white people do?

Stop erasing history, for starters. Let’s not forget that:

Educate yourself. Read the following:

Listen to POC. If you had been listening to them, then you wouldn’t have been shocked by what happened in Charlottesville.

Talk to other white people. It’s our responsibility as white people to dismantle white supremacy and to stop racism.

That’s about all I’ve got. I’m tired. I spent the better part of two days working on this. But if reading about racial violence exhausts me so, how much worse must it be to experience racial violence?

My fellow white Christian Americans, we need to do better in condemning the beliefs of white supremacy.

Reading has always been my favorite hobby. Ever since the pandemic started in 2020, I've leaned into … END_OF_DOCUMENT_TOKEN_TO_BE_REPLACED

On March 10, 2022, I received an unexpected email from LinkedIn. Normally Gmail sorts these into … END_OF_DOCUMENT_TOKEN_TO_BE_REPLACED

You are so gorgeous. The words hit me quickly, quietly. Panic rose up in my throat even as I … END_OF_DOCUMENT_TOKEN_TO_BE_REPLACED