If you’ve never heard of Crohn’s Disease, that’s okay–most people haven’t. According to the Crohn’s and Colitis Foundation of America, “Crohn’s disease is a chronic inflammatory condition of the gastrointestinal tract.” 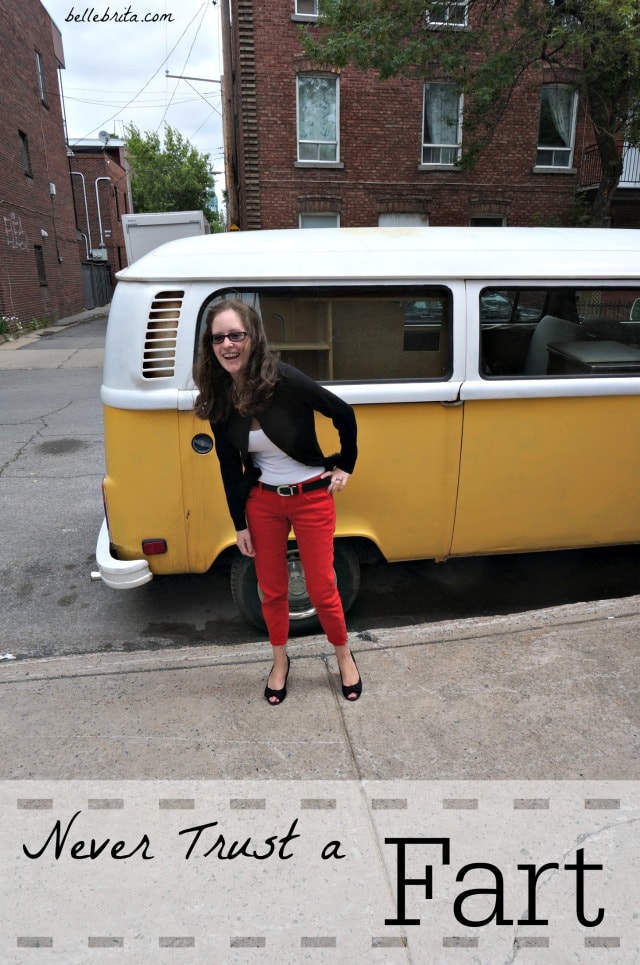 In other words, I’ve spent most of my life taking multiple prescriptions and over-the-counter medications, carefully monitoring my diet, and struggling with my weight. And I’ve spent an unusual amount of time in pain, in the bathroom, and in the hospital. Plus I’ve spent way too much time sleeping, farting, pooping, burping, and throwing up.

And I’m among the lucky ones.

I respond well to treatment. I do well on a high-fiber diet. The severity of my disease is only moderate. I’ve only been hospitalized once. I’ve never had surgery.

Many people with Crohn’s Disease (or its friend Ulcerative Colitis) are in worse condition than I am.

But I still want to share just a little glimpse of what it’s like to be “lucky” with Crohn’s Disease.

Last Saturday I drove to Greenwood to spend several days with my dad.

Late Sunday night I woke up feeling feverish. My incessant burping–yes, I burp consistently albeit quietly throughout the day–was different than usual.

I recognized the signs of needing to throw up, so I dragged my freezing and feverish body to the bathroom. I was just in time to violently purge into the toilet, my entire body convulsing to the point that I felt utterly weakened afterward.

I brushed my teeth and poured myself a glass of water, feeling dehydrated. I felt a bit better after several sips, and I slowly finished off most of the glass. I tried to go back to sleep, but due to the discomfort of my fever, slept rather fitfully.

I’m not sure how much later I woke up again with the sudden urge to vomit. Luckily one of my hidden talents is getting to the bathroom very quickly. I completely emptied the contents of my stomach, including all the water that had felt so refreshing.

When I was done throwing up, I again felt dehydrated, but I was wary of putting anything in my stomach. I brushed my teeth again and refilled my water glass, but only took a single sip to satiate my thirst.

Each time I woke up during the night, I took a small sip of water. Luckily I didn’t throw up again.

I spent most of Monday exhausted and feverish. I only ate two small bowls of Cheerios all day, but I did drink a reasonable amount of water and of juice. My fever finally broke sometime Monday night, and I woke up feeling much better on Tuesday morning.

Alas, it was simply a brief reprieve.

As I already mentioned, I burp incessantly. I also suffer (or rather, the people who live with me suffer) from frequent gas.

But honestly, if my body had just been a bit noisier than usual, I wouldn’t have thought twice about my experiences. My stomach gurgles have caused strangers to peek over at me in public, with interesting looks of surprise when they discover a petite young woman making such stomach sounds.

Alas, my adventures in Crohn’s Disease were only warming up. Eventually I felt a particularly forceful fart coming on. Any good Crohnie knows to never trust a fart, particularly one that needs even a smidgen of effort to release.

I darted away to the bathroom only to shit pure liquid accompanied by the most noxious fumes. I made such explosive noises that I almost wanted to record them. My epic diarrhea sounded more like the sound effects of a child’s obnoxious potty book than anything that should actually happen in real life.

This scene replayed itself many more times that night, and well into the night, much later than I would have liked.

I omitted the painful diarrhea from my tweet. It felt a little TMI.

Unfortunately, the bloating, bad gas, and frequent diarrhea continued into Wednesday. In order to get back to Duluth without pooping myself during the drive, I had to take anti-diarrhoeal medication, which is generally a no-no for Crohn’s patients.

Only yesterday did I finally feel back to normal. Even then, I was cautious with my food. I normally don’t have many issues with food, but to be on the safe side, I mostly ate carbs and avoided raw fruits/veggies.

That is just a small sampling of what life is like for a lucky Crohn’s patient.

I lay my life bare for the world to read in the hopes that my story will inspire compassion. Not all physical disabilities can be seen on the outside. People with invisible illnesses often need kindness, patience, understanding, and accommodations just as much as people with more obvious illnesses or disabilities.

The next time someone tells you they have a condition you’ve never heard of, I hope you’ll consider my story instead of blurting out, “But you don’t look sick!”

Join me in spreading awareness for invisible illnesses by sharing this post.

On March 10, 2022, I received an unexpected email from LinkedIn. Normally Gmail sorts these into … END_OF_DOCUMENT_TOKEN_TO_BE_REPLACED

You are so gorgeous. The words hit me quickly, quietly. Panic rose up in my throat even as I … END_OF_DOCUMENT_TOKEN_TO_BE_REPLACED

On the morning of December 2, 2021, Dan and I arrived at Northside Hospital around 5:20am. The … END_OF_DOCUMENT_TOKEN_TO_BE_REPLACED