I don’t actually think you’ll read this open letter. As a 28-year-old woman, I’m not your target demographic. More than that, I feel fairly apathetic about sports in general, with a special disgust for football specifically. I’ve never attended an NFL game, nor do I ever want to do so. I could win tickets to the Super Bowl, the one NFL game I watch occasionally, and I would still give the tickets to my brothers.

But you, Roger Goodell, as the NFL commissioner, are a symbol of everything wrong with the NFL. This letter is thus a symbolic gesture as well. You probably won’t read my letter to you, but other people will. If I can challenge just one person to think more critically about anything I write, then this open letter will have served its purpose. 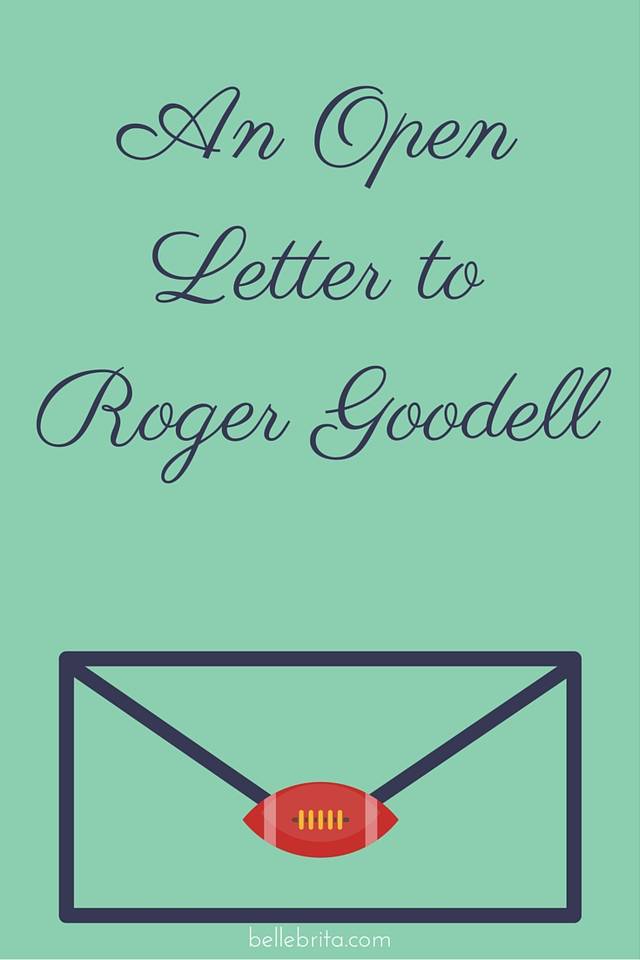 Tell me, Roger Goodell. Do you know what month October is?

October is Breast Cancer Awareness Month. You do know that, I’m sure, based on the pink gear some NFL players wear this month. I’ve heard about the “A Crucial Catch campaign.” My late grandmother was a breast cancer survivor. I can’t fault anyone who wants to raise awareness for cancer screenings and money for cancer research. I know that some NFL players have family members affected by breast cancer. I’m sure their participation in Breast Cancer Awareness Month is genuine.

According to the NFL website, y’all have raised about $8 million for the American Cancer Society since 2009. That’s awesome. Yay cancer research. $8 million is a lot of money that can do a lot of good.

Then again, you alone make about $30 million a year. (Or it is $44 million now?) Suddenly $8 million in 5-6 years just seems a lot less impressive. In fact, it almost seems like your pinkification of October football is just a women-friendly PR stunt.

But hey, I don’t work for the NFL’s marketing team, so what do I know?

Did you know that, Roger Goodell?

Either you didn’t know that, or you just didn’t care about it. I mean, apparently you can only recognize domestic violence after TMZ publicly releases a video of a football player knocking his fiancée unconscious. But hey, at least you acknowledged, eventually, that you royally fucked up.

I didn’t get it right. Simply put, we have to do better. And we will… Domestic violence and sexual assault are wrong. They are illegal. They are never acceptable and they have no place in the NFL under any circumstances.

And hey hey hey! I hear you’re trying to atone for your sins! That is awesome.

The NFL has made a five-year, $25 million commitment to the National Domestic Violence Hotline. I mean, that five-year promised donation is still less than you, Roger Goodell, personally make in one year, but it’s a start.

The NFL has also instituted a no-tolerance policy for domestic violence. The first offense warrants a six-game suspension; the second offense, banishment.

Which would be awesome if the NFL were actually following your no-tolerance policy. Can you explain to me why Greg Hardy only had a four-game suspension?

What will you do?

P.S. Full disclosure, the rates of domestic violence among NFL players is less than among American men in the same age group. That said, it’s still the number one cause of arrests among NFL players.

On March 10, 2022, I received an unexpected email from LinkedIn. Normally Gmail sorts these into … END_OF_DOCUMENT_TOKEN_TO_BE_REPLACED

You are so gorgeous. The words hit me quickly, quietly. Panic rose up in my throat even as I … END_OF_DOCUMENT_TOKEN_TO_BE_REPLACED

On the morning of December 2, 2021, Dan and I arrived at Northside Hospital around 5:20am. The … END_OF_DOCUMENT_TOKEN_TO_BE_REPLACED