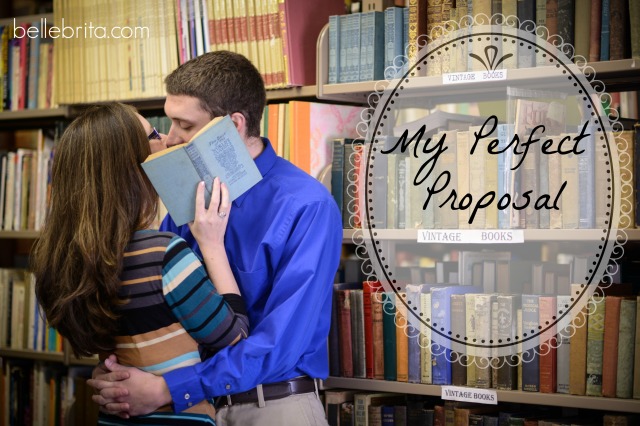 A year ago today, Dan asked me to marry him!

Even though we had already finished our premarital counseling, picked a date, and booked our church by the proposal, Dan still managed to completely surprise me with his proposal.

As I’ve mentioned before, I was interning at Kappa Kappa Gamma when Dan and I first started dating. One of our non-dates during our whirlwind two and a half weeks together was a museum tour. He stopped in Columbus to see me while traveling for work, and I gave him a tour of our history museum. (I did check with my boss first, and even asked her if she needed to chaperone, but she was cool with it).

We kissed in the belvedere.

It wasn’t as romantic as it sounds, since Dan felt nervous about getting caught. I explained the belvedere was a traditional place for kissing, and no one at Kappa could really see us, but he was still nervous. It was cute.

And apparently Dan remembered how nice it was to kiss in the belvedere, since that’s where he proposed last October 20th.

A few weeks prior, my former bossed Kylie asked my best friend Libbi and me if we could volunteer with the museum ghost tour. She told us that Libbi could bring her fiancé Henry and I could bring my boyfriend Dan. I miss interning with the museum, so of course I said yes.

After the ghost tour for the public, Dan asked me if I would give him a ghost tour of the museum. I was honestly surprised, since we had been on the Christmas tour the year before, and I had given him a full tour when we first started dating. But he eventually talked me into it. So I walked him around the whole museum and tried to remember everything Kylie had said during her ghost tour. We finally made it to the top of the museum, in the belvedere.

I noticed a Harry Potter book on the bench, but I didn’t think anything of it. Then I noticed the video camera mounted on the window and started examining, still totally oblivious to what was going on. Dan kept suggesting that I open the Harry Potter book, which was completely ridiculous because everyone knows you don’t touch someone else’s book. He finally convinced me to open it, and inside was my engagement ring. Then he got down on one knee and asked me to marry him! Of course I said yes, and lots of kissing, hugging, laughing, and crying ensued.

So I had spent a lot of time thinking about the ring and the proposal. Upon wandering the internet, I found the great idea of hollowing out a Harry Potter book for a magical themed ring box. Absolutely perfect for Brita I thought… Then came the ring. Because the ring was so unique, it took a long time from confirmation to creation and finally to shipping. I knew Brita was expecting something, so I conspired with her friends to plan a surprise. The idea was to do something at the Kappa museum since that is where she lived when we first met, and was the center of our first few dates in Columbus. The timing was going to be the hard part… How do we lure Brita to Kappa without her raising an eyebrow?

Libbi and Kylie were absolutely perfect in unwittingly getting Brita to invite me to the ghost tours. Doing it on Sunday night was perfect as Brita had probably been guessing something special would happen the weekend after our anniversary (of being officially dating). We had spent a lot of time together that weekend including going to the zoo (which we absolutely love), and I’m sure she had given up by Sunday night that anything big was going to happen.

When we got to the museum, I realized how much of “the plan” was still up in the air… Quick thinking, some secret texts, and casual glances with Libbi got Kylie to take Brita to the front of the museum while Libbi and I were able to stay in the back and throw together the final few steps. I explained how to work the camera and Libbi snuck up the back stairs to plant the ring and camera and start it recording. I just had to wait nervously (for the pizza guy to arrive).

After normal tours were done, Kylie and Brita came into the back and I asked Brita if I could get a tour. She wasn’t really in the mood for another tour, and I started panicking inside. How could I convince her to lead me up to the belvedere (the logical end to any tour) without arousing suspicion… After a few “innocent” pleads, I finally got her to relent and give me the tour, but she wasn’t overly enthusiastic about it. She quickly went from room to room and I’m not even sure she was giving me a very thorough tour. It was spooky though; on this ghost tour the lights upstairs had already been turned off, and I accidentally scared Brita going up the stairs to the top floor. After what seemed like an eternity, she opened the door to the belvedere and started up the stairs…

At the top, she turned around, totally ignoring the book placed obviously on the bench and immediately goes to look at the camera stuck to the window facing the book. I just stand next to the book and plead with her to ignore the stupid camera and gee, isn’t it weird there’s a book up here? Maybe you should see whose it is? Anything to get her over here and look inside… And then she did, and well, you can see the rest on youtube.

Afterwards, we went downstairs where Libbi had perfectly had champagne and more friends waiting for us. After a brief celebration, the crushing reality hit… The pizza guy never arrived with the food. So even better, we ended up going out to a nicer pizza place and having a big celebration dinner together with friends and a new ring.

And I didn’t have a chance to blog about it a few days ago, but three years and four days ago is when Dan asked me to be his girlfriend. We’ve officially been together for over three years. I’ve worn a fancy ring on my left hand for exactly one year. And we’ve been married a little more than six months.

There are days when it still doesn’t seem real to me, not that I have a husband, but that I ever managed to find a boyfriend like Dan in the first place. He’s wonderful, and I couldn’t be happier.

You are so gorgeous. The words hit me quickly, quietly. Panic rose up in my throat even as I … END_OF_DOCUMENT_TOKEN_TO_BE_REPLACED

On the morning of December 2, 2021, Dan and I arrived at Northside Hospital around 5:20am. The … END_OF_DOCUMENT_TOKEN_TO_BE_REPLACED

I was diagnosed with Crohn's Disease more than 25 years ago, at just 8 years old. While my parents … END_OF_DOCUMENT_TOKEN_TO_BE_REPLACED