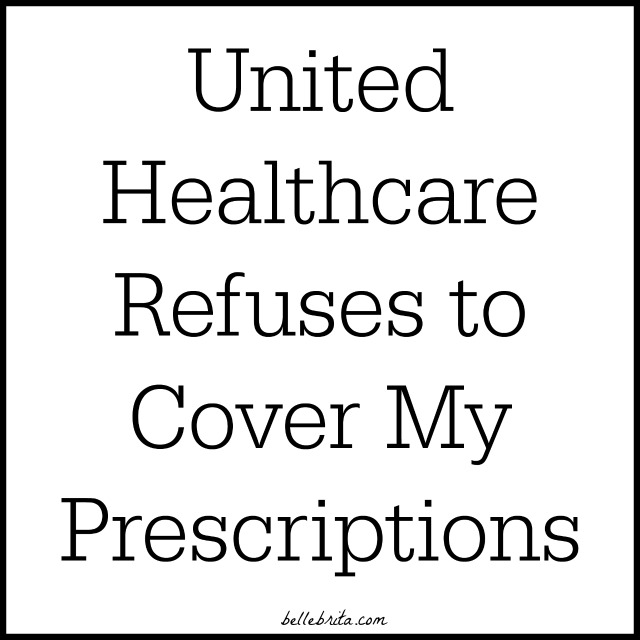 I take two monthly prescriptions. I take Pentasa for my Crohn’s Disease. I take hormonal contraception via the Patch to prevent pregnancy AND to help with my periods/cramps.

Dan and I found out about a month ago that United Healthcare, the health insurance offered through his work, won’t cover the Patch. For the record, my prescription is for the generic. We’ve now paid for it twice out-of-pocket, $85 the first time (in Ohio) and $100 the second time (in Georgia). Dan has started the appeals process with them, but it’s a time-consuming affair that drags on.

Just so everyone is clear, it is ILLEGAL for United Healthcare not to cover at least one option of every type of contraception. And yet, they don’t cover any forms of the Patch.

Yesterday I called in a refill of my Pentasa at CVS. Dan and I went to pick it up after work.

The pharmacist told us that United Healthcare refused to cover it, claiming Pentasa is on their “exclusions” list. They won’t cover Pentasa. The out-of-pocket cost for 30 days?

Because a phone representative for a health insurance company can totally treat my incurable, lifelong disease.

So now we get to start a SECOND appeals process, just so that our health insurance will cover my prescriptions.

For the record, I’ve been with numerous insurance companies over the years, and this is the first time one has EVER denied coverage of Pentasa.

If you would like to join me online in calling out United Healthcare’s bullshit, their Twitter handle is @myUHC.

You are so gorgeous. The words hit me quickly, quietly. Panic rose up in my throat even as I … END_OF_DOCUMENT_TOKEN_TO_BE_REPLACED

On the morning of December 2, 2021, Dan and I arrived at Northside Hospital around 5:20am. The … END_OF_DOCUMENT_TOKEN_TO_BE_REPLACED

I was diagnosed with Crohn's Disease more than 25 years ago, at just 8 years old. While my parents … END_OF_DOCUMENT_TOKEN_TO_BE_REPLACED