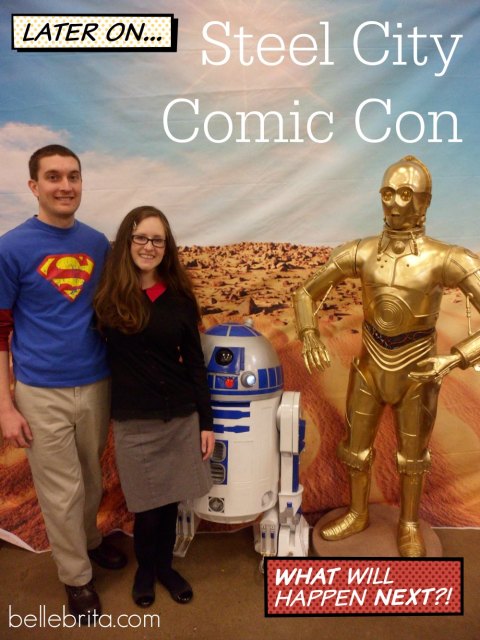 During our three or so years together, Dan and I have now attended three Comic Cons. The first was in Toronto, last year we stayed local in Columbus, and this weekend, we attended the Steel City Comic Con in Pittsburgh!

Our original plan was to attend the Columbus Comic Con again, but we weren’t too impressed with their celebrity line-up. A few quick Google searches back in August revealed that two of our favorite Star Trek actors would be appearing at December’s Steel City Comic Con! Who exactly did we meet this weekend?

Dan and I made the early decision that for Christmas we would exchange only a few small physical presents. Instead of trying to spend a lot of money on stuff we don’t need, we treated ourselves to a weekend in Pittsburgh with all the pricey bells and whistles of a Comic Con. If you’ve never been to any sort of nerdy convention, autographs and photo ops are not cheap!

I originally had elaborate plans for our costumes this weekend, but getting sick messed up my schedule. So instead of dressing up like Jadzia Dax one day and wearing a homemade shirt with FAKE GEEK GIRL written out on it the next, I dressed up as Hermione on Saturday and as Amy Farrah Fowler on Sunday.

Aka I wore costumes complete with clothing and accessories I already owned because I am just that cool.

Dan dressed up as a typical geek on Saturday, complete with a pocket protector, and as Sheldon on Sunday. I’m not sure if anyone recognized our costumes, but our low-key approach did make it easier to blend in at the mall.

Saturday was definitely the most important part of the weekend. At noon, Michael Dorn and Terry Farrell did a Q&A together. As weekend pass holders, Dan and I got to sit in the sectioned-off section at the front of the room. We had great seats, third row, center-ish.

I might have cried when Michael Dorn and Terry Farrell finally walked into the room.

Years after the conclusion of Star Trek: Deep Space Nine, the two of them continue to have great chemistry together. They definitely fed off each other during the Q&A. It was a beautiful thing to watch.

The best question to my feminist ears came from a young woman, who basically asked exactly what I wondered. She asked what it was like for them as a woman and a minority to play such good characters in the Star Trek universe and if they thought things had improved for women and minorities on screen.

Michael Dorn immediately quipped, “As a woman…” and the audience ROARED with laughter. But after we calmed down, Terry Farrell said some really great things.

Dax is both strong and emotionally available. -Terry Farrell #StarTrekDS9

She’s a science officer–smart. She’s interested in Klingon culture–strong. She kept her blood oath with her Klingon friends–loyal and brave. She dresses up and has fun with Kira–feminine.

And playing Jadzia Dax actually helped Terry Farrell become a better woman. She alluded to her disappointment with the producers of the show near the end. She briefly mentioned that they treated her in a way that surprised her considering they had given her the opportunity to play a character as great as Jadzia Dax. Apparently that conflict, and her new-found strength, eventually led to her decision to leave the show before the final season.

Michael Dorn totally deflected the question of representation of POC in TV and film. While I was disappointed he didn’t want to address the question, I also understand it. He’s in talks to create a new Star Trek show focusing on the Klingon Empire. No one wants to bite the hand that feeds you…

After the Q&A, Dan and I had a chance to get their autographs and a picture with both of them! The photo ops were supposed to be first, but there was a problem with the photo booth, so Michael Dorn and Terry Farrell both started signing autographs.

When we were next in line for Terry Farrell’s autograph, we had the chance to witness just how truly compassionate she is. We were a respectful distance back, so we couldn’t really hear the exchange between the fan and Terry Farrell. Clearly the fan (a young woman) has been greatly inspired by Terry Farrell, since she talked to her for several minutes and started crying. Terry Farrell reached out and hugged the fan, and then leaned back, still touching the fan’s arms, looked her straight in the eyes, and said something encouraging. Part of me wishes I could have heard the exchange, but even just witnessing it felt like intruding upon an intimate moment.

Dan and I only had a few minutes to talk to Terry Farrell, but they were pretty awesome. She was SO nice and funny and smart and charismatic. She complimented Dan’s tie, and she laughed when we told her that we didn’t have to buy anything for our nerdy outfits. She said she’s always encouraging her son to “let his freak flag fly” while he still can, because the world makes it a lot harder to stay unique when you get older. We mentioned that we never really stopped “flying our freak flags,” and she congratulated us on staying true to who we are.

After a quick stop to get more cash from the ATM (poor planning, oops), we joined the line to get a picture with Michael Dorn and Terry Farrell. We lucked out since they were doing the pairs pictures first, so we only had to wait a few minutes to get a picture with both of them. Oh, and Terry Farrell was totally like, “Wait, are your glasses purple?” When I said yes, she gestured to her sweater and said, “I LOVE purple!” So basically we’re the same person.

We then walked around and checked out about half of the booths to give Michael Dorn enough time to finish his singles pictures and return to the autograph line. His line for autographs was a bit longer, so we had even less time to talk to him. Still, it was exciting!

With our glossy photo and two fancy autographs, we realized we had already accomplished our daily goals for the Steel City Comic Con. Even though it was only about 2pm, we called it a day. We trekked over to the mall for lunch, and I bought some new pajama pants on sale at Macy’s. We spent the rest of the day relaxing in our hotel room.

On Sunday we actually woke up early enough to be at the Steel City Comic Con before it opened. The regular opening time was 10am, but with our weekend passes, we got in at 9:30am. We checked out the rest of the booths. I bought a Jadzia Dax action figure to match the action figures we already have of William Riker and Deanna Troi.

Dan and I also splurged on nerdy grammatical t-shirts. The booth guy just KNEW he had a sale when the two of us stopped dead in our tracks and started exclaiming excitedly over all the grammatical comics. We greatly enjoyed geeking out with him, and I’m sure he enjoyed our purchase of two new shirts.

One of the booths had a full-sized C-3PO and R2-D2. Photo ops were by “donation” only. The pictures were totally worth our $3 donation! The guy was so helpful, taking both vertical and horizontal pictures of us, and even having us stand in different poses. Then he looked over the photos on my digital camera with us to make sure we liked them. Best $3 we ever spent!

Have you ever been to a Comic Con? What did you enjoy most? Which nerdy celebrity would you love to meet? Share your thoughts in the comments! 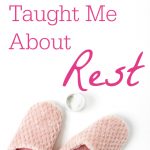 Welcome to the ninth day of the 2020 Love Blog Challenge! Today’s prompt is Acceptance. Check out … END_OF_DOCUMENT_TOKEN_TO_BE_REPLACED 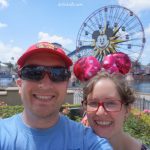 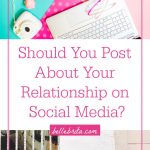