Last week I shared 5 reasons Democrats should vote libertarian. Today I address the Republicans to emphasize your shared ideals with the Libertarian Party. 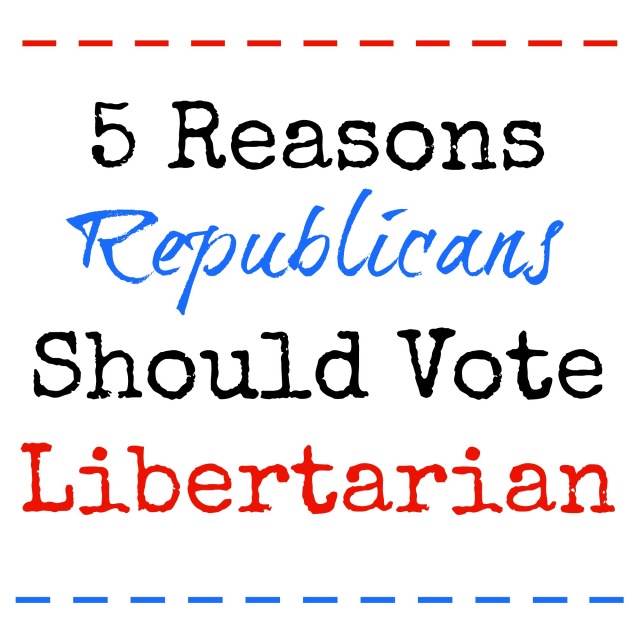 Government should not incur debt, which burdens future generations without their consent. We support the passage of a “Balanced Budget Amendment” to the U.S. Constitution, provided that the budget is balanced exclusively by cutting expenditures, and not by raising taxes.

2) Libertarians believe in job creation via private industry, not the government.

Again, from the Party Platform:

Libertarians want all members of society to have abundant opportunities to achieve economic success. A free and competitive market allocates resources in the most efficient manner. Each person has the right to offer goods and services to others on the free market. The only proper role of government in the economic realm is to protect property rights, adjudicate disputes, and provide a legal framework in which voluntary trade is protected. All efforts by government to redistribute wealth, or to control or manage trade, are improper in a free society.

I can’t say it much better than that. While we will always need certain civil servants, like teachers and police officers, the government’s responsibility is NOT producing more jobs.

3) Libertarians believe in the Second Amendment.

To quote our Party Platform:

We affirm the individual right recognized by the Second Amendment to keep and bear arms, and oppose the prosecution of individuals for exercising their rights of self-defense. Private property owners should be free to establish their own conditions regarding the presence of personal defense weapons on their own property.

Dan and I don’t personally have any desire to own guns, but we would be cool with everyone around us owning guns.

4) Libertarians want to repeal the PPACA.

But we also want to end restrictions that make it impossible to buy health insurance across state lines. From the Libertarian Party Platform:

We favor a free market health care system. We recognize the freedom of individuals to determine the level of health insurance they want (if any), the level of health care they want, the care providers they want, the medicines and treatments they will use and all other aspects of their medical care, including end-of-life decisions. People should be free to purchase health insurance across state lines.

Considering the PPACA is the reason why my mother’s brain surgery had to be delayed a week, and she has to go to Greenville, SC (an hour away from where my parents live) for all of her cancer treatments, my family is not a big fan of the PPACA.

All persons are entitled to keep the fruits of their labor. We call for the repeal of the income tax, the abolishment of the Internal Revenue Service and all federal programs and services not required under the U.S. Constitution.

The tax system is ridiculously confusing, especially if you have any unusual circumstances or employment. My employment status is that of an independent contractor. None of my income is withheld for taxes… but I have to save it throughout the year to pay my taxes in April. Dan and I spent weeks figuring out my taxes this year.

Depending on your priorities as a Republican, you might want to vote Libertarian this year. I encourage you to look at who is running in your area. Research third-party alternatives. Most importantly, no matter what you believe politically, EDUCATE yourself and VOTE!

What issues are most important to you? Have you found reliable candidates who share your values?

100% pure, organic jojoba oil has become a staple in my daily beauty routine. I use it to remove … END_OF_DOCUMENT_TOKEN_TO_BE_REPLACED

I ended up not reviewing April's Allure Beauty Box because life got in the way. I actually opened it … END_OF_DOCUMENT_TOKEN_TO_BE_REPLACED

No Buy Style Challenge is back! In case you missed the inaugural blog collaboration, here's how it … END_OF_DOCUMENT_TOKEN_TO_BE_REPLACED