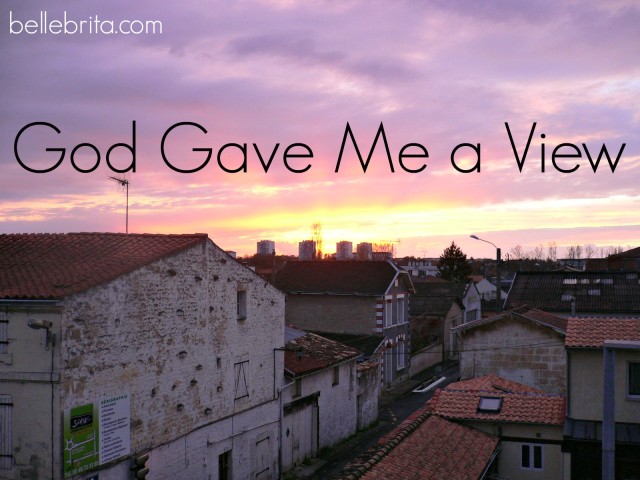 For the 2010-2011 school year, I worked as an English Teaching Assistant assistant d’anglais in Niort, France as part of TAPIF (Teaching Abroad Program in France). I primarily worked at the Lycée Jean Macé, which also provided an apartment for me and the Spanish Teaching Assistant, Mary Cruz. We were pretty lucky that our high school provided our apartment. Our rent was very cheap (although our utilities were insane), it was right  next to the lycée, and it was very big by French standards. Mary Cruz and I each had our own bedrooms. We shared a bathroom, kitchen with dining area, and large living room. Plus it was completely furnished with cast-offs from teachers and past assistants over the years. 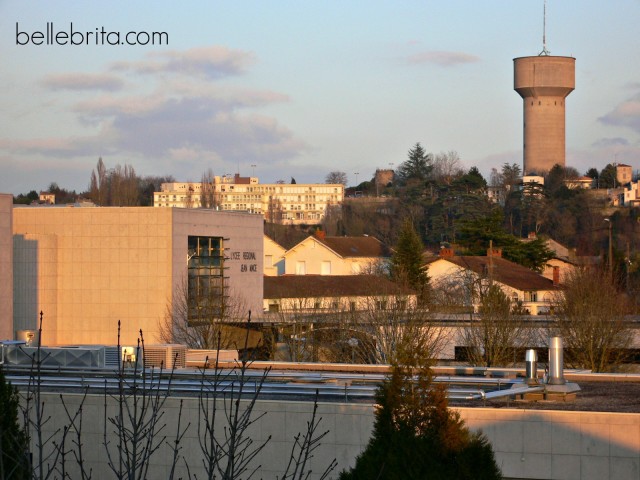 Niort is a primarily urban, medium-sized city in the Deux-Sèvres region département of France. We lived right next to the high school and a grocery store, both of which I could see outside my bedroom window. It wasn’t the most interesting of views, but it was certainly exciting when the students went on strike grève.

The views from our kitchen and living room were equally bland and commercial. While our apartment was a convenient ten-minute walk from the city center, our street wasn’t that exciting.

But during my seven months in Niort, I enjoyed some of the most beautiful sunsets of my entire life. With an old, cheap camera, I did the best to capture the painted sky, but none of my photos compare to the picture God gave me. 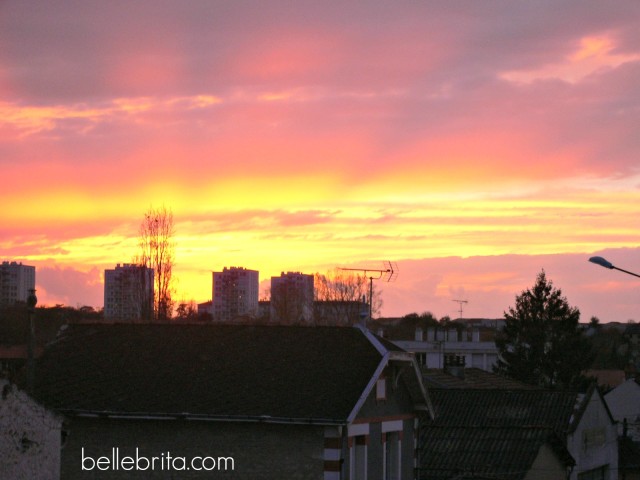 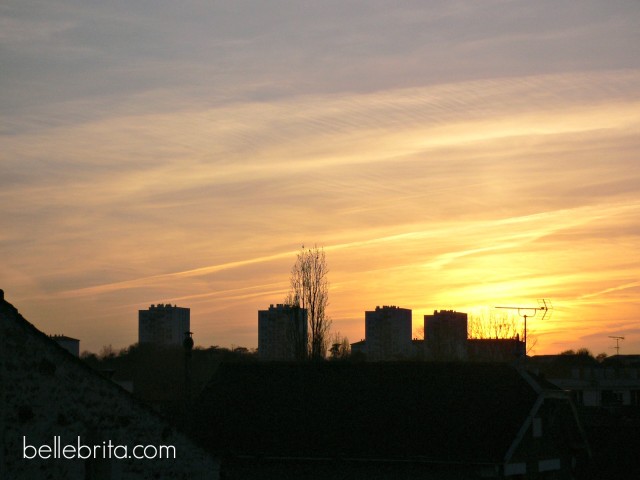 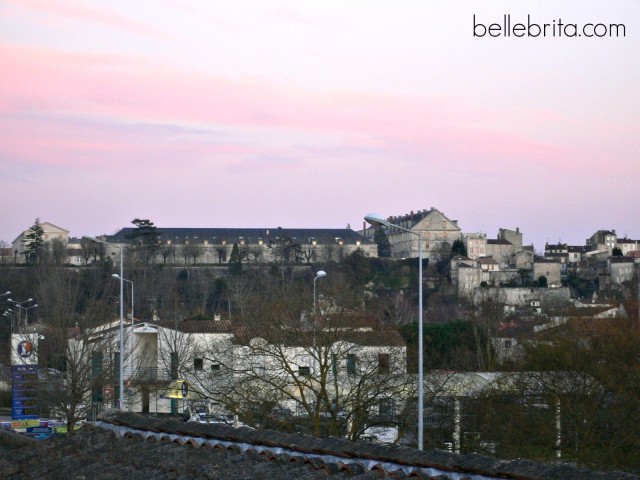 I tried always to focus on the positive. I tweeted about the delicious, inexpensive wine I was drinking. I blogged (at my livejournal… don’t laugh) about how great my students were. I posted travel pictures to Facebook. I didn’t mention the extremely tight budget I kept, living off less than 800 euros each month. I didn’t share the repetitive meals I ate to save money. I never talked about how lonely I was most of the time, being friendly with the other expats and some French locals, but not feeling close to any of them. I joked about hand-washing my laundry all year, leaving out my dry, cracked skin that took months to heal. I tried really hard not to let on that Mary Cruz and I didn’t get along well.

After a year in Le Vésinet, which certainly had its own challenges, being in Niort was hard. I didn’t just miss everyone in the States, but I missed my cousins in Saint-Germain-en-laye, my fellow au pairs, and Paris. 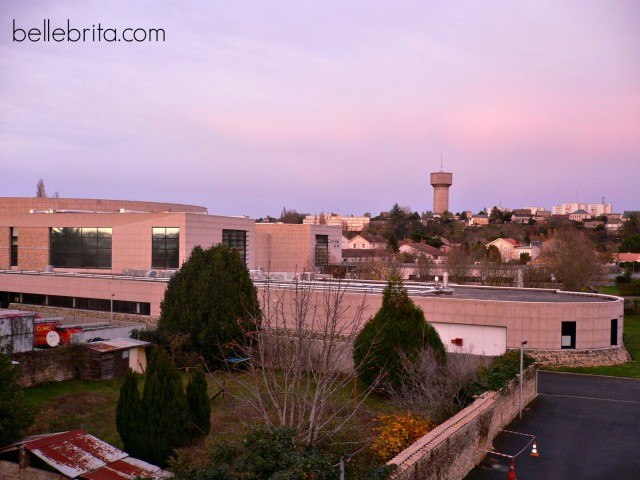 But I adapted. I realized you don’t have to be best friends with people to have fun with them. I stopped feeling left out when other assistants got together, and I started inviting myself to stuff. I reached out to other assistants who were quiet. I skyped with my best friend Sally, who had struggled working as an assistant the year before. I fell in and out of love with my best friend McPhee with our daily phone calls. I watched too much TV, I wrote a bunch of short stories, and I read a million books. I joined OKCupid, suffered through one awkward encounter, got tricked into a first date with a pretentious academic, and kinda sorta dated another assistant. 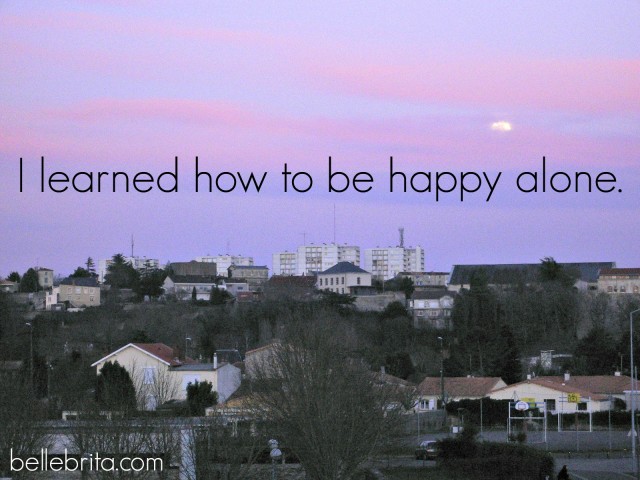 I learned how to be happy alone. I found contentment with myself.

God revealed the light in the darkness.

She taught me to find the colors amidst the gray.

Everything I loved about my time teaching in Niort had always been there–I just had to find a different kind of happiness.

My two years in France were two of the best of my life. Not because they were easy, or filled with adventure, but because they challenged me to become a better woman.

Thank you Emma, Kelly, and Rebecca for the prompt, “Room with a View.” This post took a totally different direction than I’d planned, but sometimes writing reveals truths we never even realized.

On March 10, 2022, I received an unexpected email from LinkedIn. Normally Gmail sorts these into … END_OF_DOCUMENT_TOKEN_TO_BE_REPLACED

You are so gorgeous. The words hit me quickly, quietly. Panic rose up in my throat even as I … END_OF_DOCUMENT_TOKEN_TO_BE_REPLACED

On the morning of December 2, 2021, Dan and I arrived at Northside Hospital around 5:20am. The … END_OF_DOCUMENT_TOKEN_TO_BE_REPLACED