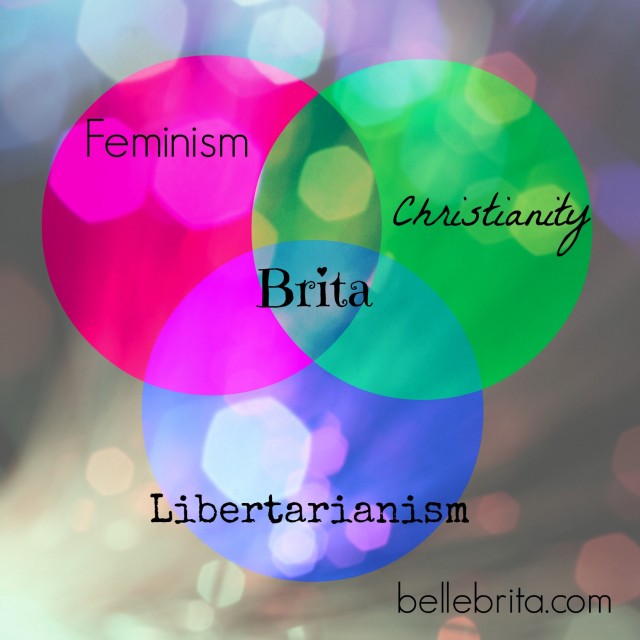 This post is not meant to serve as an in-depth, academic-level explanation for why I am a Christian feminist libertarian. This post is merely an introduction to the intersections of faith, feminism, and freedom in my own life.

I believe in a Greater Being, the creator of Heaven and Earth, a religious entity so big that She is beyond our limited human understanding, a God of Love. I believe that Jesus is the Son of God, who died on the cross to save our sins.

I believe that women are human beings with equal worth and equal potential to men. I recognize that we live in a patriarchal society that promotes toxic ideas of masculinity and oppressive ideas of femininity, rather than allowing for individual differences and unique expressions of gender identity. I understand that privilege and discrimination are not limited to gender.

I believe in a limited government and in individual freedom. I believe in the right to life and the right of free speech and action.

My Duties as a Christian Feminist Libertarian

As a Christian, I believe it is my duty to demonstrate the love of God through my own actions and to spread the Gospel. As a libertarian, I believe that all individuals have the freedom to worship as they please, and freedom FROM religion is even more important than freedom OF religion.

As a feminist, I believe it is my duty to raise awareness of gender inequality and other forms of discrimination. I work actively both to educate others on specific forms of inequality still present in our nation and to lessen or eliminate discrimination.

As a libertarian, I believe that my duty is to vote in all elections, including small ones, and to support libertarian candidates. I believe that spreading Christianity and feminism are primarily, although not exclusively, personal duties and not the government’s responsibility.

I am not the perfect Christian, the perfect feminist, or the perfect libertarian. I will always have room for growth and improvement. I strive to learn more about my faith by studying the Bible and reading a vast variety of religious writers. While I know a fair amount about male privilege and gender discrimination, I am still learning more about other forms of privilege and discrimination by listening to marginalized peoples. I need to be more involved with politics on the local level, and I need to stay better informed of local and state issues, which I can impact more than I can impact national or global problems.

This is just scratching the surface of my belief systems as a Christian feminist libertarian. Balancing three sets of ideals is not always easy, and in practice, I often have to choose a balance between just two, not all three. The more Christians, feminists, and libertarians who realize their shared goals and interests, the better America will be.

Did you link up for the #FaithFeminisms synchroblog? I would love to read your own thoughts and feelings on the topic!

On March 10, 2022, I received an unexpected email from LinkedIn. Normally Gmail sorts these into … END_OF_DOCUMENT_TOKEN_TO_BE_REPLACED

You are so gorgeous. The words hit me quickly, quietly. Panic rose up in my throat even as I … END_OF_DOCUMENT_TOKEN_TO_BE_REPLACED

On the morning of December 2, 2021, Dan and I arrived at Northside Hospital around 5:20am. The … END_OF_DOCUMENT_TOKEN_TO_BE_REPLACED