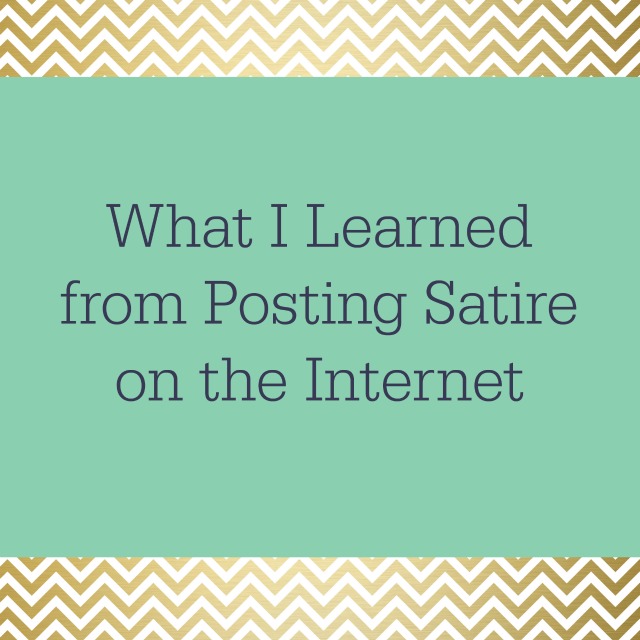 Last month, I published my wildly-popular piece “My Husband Didn’t Take My Last Name,” a satirical look at naming traditions at marriage. With hundreds of comments on both the original and the syndicated versions, I learned a few things.

1) Some readers are just skimming my blog.

In my perfect world, all of my readers obsessively read every word of every blog post I publish. Alas, as a skimmer myself, I know that some of you are just reading the main points. In fact, I anticipate skimming behavior and try to format my blog posts with subheadings, bullet points, and short paragraphs. So how do I know that y’all are skimming?

I opened my satire by explicitly stating it was satire. And yet, several comments were along the lines of, “At first I was so mad, but then I realized what you were doing!” Yeah, well, if you had read the italicized paragraph at the beginning, I clearly explained the post was satire.

That said, I only published the satire itself on the syndicated copies, so those readers didn’t have the benefit of an explanation… Which some of them made quite apparent…

I don’t know why I was surprised at the number of confused comments. I think I tend to over-estimate the intelligence of people on the Internet. Clearly more than one person had never heard of satire. On a few of the Huffington Post comments, I literally just replied with a textbook definition of satire.

For the record, Taylor Swift’s “Blank Space” is satire.

3) Unless a man experiences a problem firsthand, the problem does not exist.

I literally laughed out loud at the mansplaining in the comments.

NO ONE CARES THAT YOU DIDN’T CHANGE YOUR NAME.

I exaggerate, but only slightly. So here’s the deal, all people, but especially men.

then you probably don’t know how people react to that sort of decision. The exception would be if you are a man who took his wife’s name, which means you have probably faced similar reactions, although certainly not identical ones.

Trust me, I’m not just making shit up. I’ve been vocal about my desire to keep my last name since well before Dan was in the picture. If you think that’s unusual, you probably haven’t spent much time on a southern college campus. Marriage was always a hot topic! And in the world of Lilly Pulitzer and monograms, it was easy for me to mention my monogram wouldn’t ever change.

So I think I know what I’m saying when I explain that not everyone respects a woman’s choice to keep her name upon marriage.

Overall, the response to my piece was positive. And while I can’t believe so many people did not understand it was satirical, that is a sign of well-written satire. More feminist satire might be in my future!

Have you ever written satire on your blog? What are your favorite satirical sites? Do you have a topic you’d like me to satirize in the future? Share your thoughts in the comments!

May the 4th be with you... Yes, I'm a Star Wars nerd and proud of it. Note: I wrote this post … END_OF_DOCUMENT_TOKEN_TO_BE_REPLACED

I just want to blog about nothing and everything right now, so... Whatever Wednesday! Please enjoy … END_OF_DOCUMENT_TOKEN_TO_BE_REPLACED

Y'all. It's been a minute. Or roughly 6 months. I've taken blogging breaks before. I even … END_OF_DOCUMENT_TOKEN_TO_BE_REPLACED