I did my best, I really did, to encourage Democrats to vote for Bernie Sanders and to encourage Republicans to vote for literally anyone except for Donald Trump. My post on the presidential primaries continues to receive daily search traffic.

But it wasn’t enough. The Clinton family is a well-oiled political machine. Trump is an oily businessman who knows how to get what he wants. Unless either the DNC (Democratic National Committee) or the RNC (Republican National Committee) pull some last-minute strings, Hillary Clinton and Donald Trump will be on the 2016 presidential ballot. 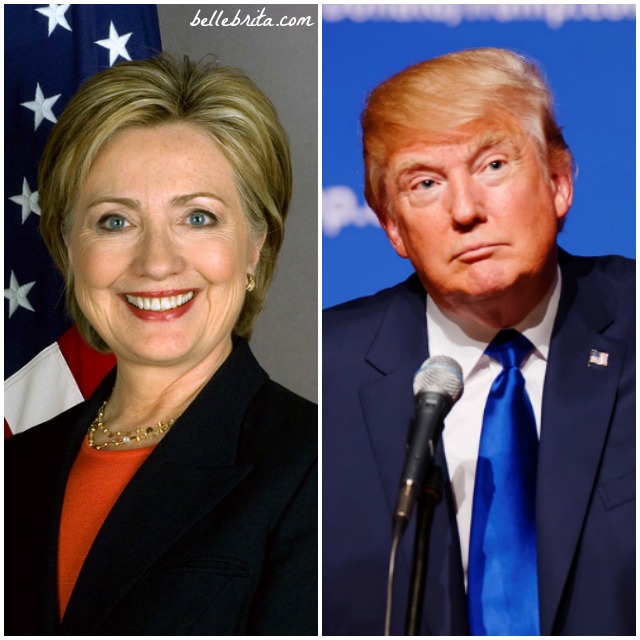 And a lot of people are not okay with that. In fact, a recent poll of over 16,000 Americans reveals that the majority of Americans dislike both Clinton AND Trump. From the NBC News summary:

More than that, the number-one reason both Clinton supporters and Trump supporters like their preferred candidate is because they oppose the other candidate. Which raises the question…

Why are American voters settling for the “lesser of two evils”?

There is a third option. Or rather, a third-party option. 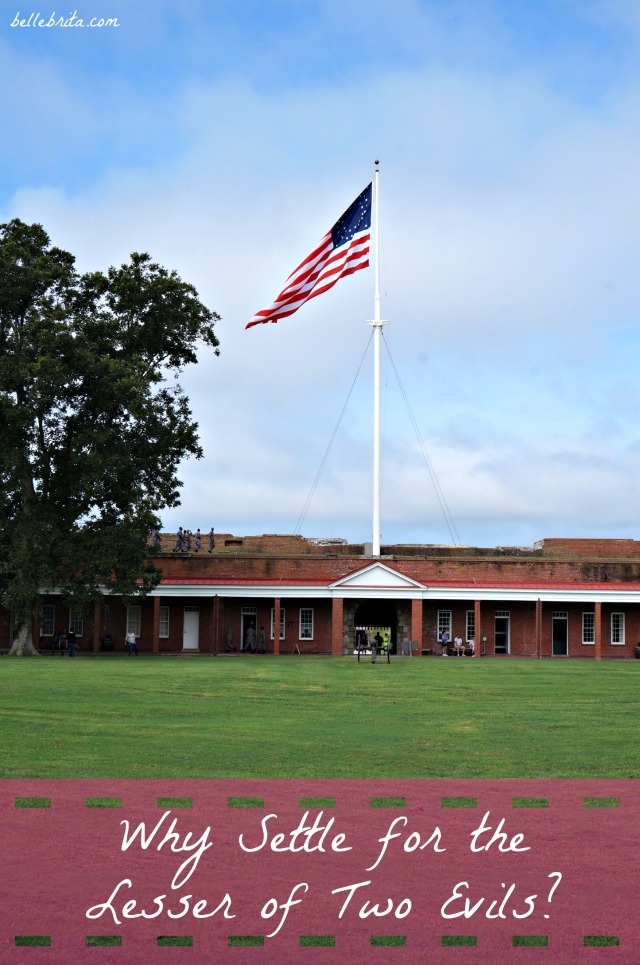 What are US third parties?

Who should vote third-party?

Are your values more closely aligned with a third-party than with either major party?

Do you “dislike” or “hate” both Clinton and Trump?

Do you think the presidential primaries do not adequately reflect the wishes of the voters?

Are you upset with the current political system?

Is the future of your country more important to you than winning?

Do you live in a red state or a blue state? In other words, does your state always vote for either the Republican presidential candidate or the Democratic one? Based on historical precedent, a majority of voters in your state will still vote Republican or Democratic. If so, then your vote will not affect your state’s presidential vote.

And you should vote third-party.

A recent Washington Post-ABC News poll indicates that 44% of voters want a third-party option against Donald Trump and Hillary Clinton. Now is the time to vote third-party.

Furthermore, my own totally-not-scientific poll* indicates a very split electorate. I asked, “Out of the following candidates, which would you elect as president?” Their answer choices (randomized) were:

Out of 100 responses, 36% chose Hillary Clinton, but 35% chose “Other.” Those responses included:

And a few select direct quotes from those “Other” replies:

*Really not scientific. My demographics are 71% female, 46% aged 21-29, and 89% white. Also I did get over 100 responses, but the free version of SurveyMonkey only lets me access the first 100. If I hit 250 responses, I’ll spring for a month’s subscription and do a whole blog post on the survey results.

What is the Libertarian Party?

Founded in 1971, the Libertarian Party is the third largest political party in the United States measured by votes cast. In the 2012 presidential election, Gary Johnson and Jim Gray won 1% of the popular vote, with a record 1,275,821 votes, the most received by any libertarian presidential candidate.

If you’ve been around my blog before, then you know I’m a libertarian. Like I said above, the simplest way to describe myself is socially liberal and fiscally conservative. In fact, I described myself that way for a long time before I even discovered the Libertarian Party!

As Libertarians, we seek a world of liberty; a world in which all individuals are sovereign over their own lives and no one is forced to sacrifice his or her values for the benefit of others.

We believe that respect for individual rights is the essential precondition for a free and prosperous world, that force and fraud must be banished from human relationships, and that only through freedom can peace and prosperity be realized.

Consequently, we defend each person’s right to engage in any activity that is peaceful and honest, and welcome the diversity that freedom brings. The world we seek to build is one where individuals are free to follow their own dreams in their own ways, without interference from government or any authoritarian power.

Basically, we believe in a limited government. And not the whole faux limited government espoused by Republicans, who want a government small enough to fit inside my uterus. Libertarians are pro-choice on pretty much everything, from how you spend your money to what you do to your body. 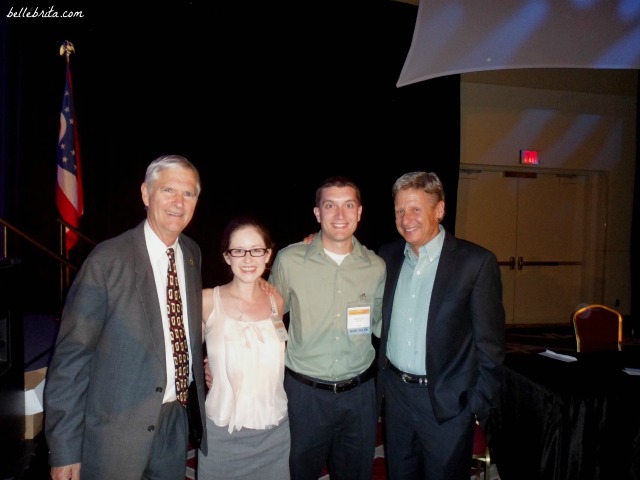 Yesterday concluded the five-day Libertarian National Convention, held this year in Orlando. This year’s theme was #LegalizeFreedom. Yes, with a hashtag.

While we probably won’t get to see a contested convention with the Republicans or the Democrats, the Libertarian National Convention ended up contested as delegates first voted for the presidential nominee and then the vice-presidential nominee. In the first round of voting, candidate Gary Johnson (former Republican governor of New Mexico) received 49.5% of the vote, just shy of a majority. On the second ballot, Gary Johnson secured the nomination with 55.8% of the vote.

While the Republican and Democratic presidential nominees choose their respective running mates, the delegates at the Libertarian National Convention vote for the vice-presidential nominee. Gary Johnson’s choice, William Weld (former Republican governor of Massachusetts), received 49% of the vote on the first ballot. In the second round of voting, he just won the nomination with 50.6% of the vote.

When Dan and I still lived in Ohio, we attended the 2014 Libertarian National Convention in Columbus. There we met several libertarians from around the country, including Nathan Grabau. Nathan and I are Facebook friends, and I noticed he was at the convention this weekend. I reached out to him for his thoughts on Gary Johnson.

The Double Governor ticket has the ability to shift us from a think tank to a true political party. The Libertarian Party of Radical Caucus members stripping at the convention will soon be in our past. We are ready to be a serious option for American Voters, and I cannot wait to see Governor Johnson in the Oval Office.

Who is Gary Johnson?

Gary Johnson is the Libertarian Party’s presidential candidate for the 2016 general election. He was also the candidate in the 2012 election, with running mate Jim Gray.

Gary Johnson also served as the Republican governor of New Mexico from 1994-2003. During that time, he vetoed over 750 bills, more than all the other governors combined. When he left office, New Mexico was one of only four US states with a balanced budget.

When Gary Johnson and Jim Gray ran in the 2012 election, they received the most votes of any libertarian presidential candidate. And that was in an election with an incumbent Democrat and a moderate Republican. Imagine how successful Gary Johnson will be on a ballot against Hillary Clinton and Donald Trump.

Why should you vote for Gary Johnson?

If you’re worried about the $20 trillion national debt, vote for Gary Johnson. He “has pledged that his first major act as President will be to submit to Congress a truly balanced budget.”

Are you frustrated by the political machine in Washington, D.C.? Are you tired of career politicians? Gary Johnson wants to implement term limits for senators and representatives.

If you think the US tax code is too complicated, vote for Gary Johnson. He wants to overhaul the tax system and eventually replace income taxes and payroll taxes with a consumption tax.

Do you support the legalization of marijuana? So does Gary Johnson.

In his own words:

“Fifty percent of Americans right now are registering themselves as independent, meaning new voters are registering themselves as independents. Where’s that representation? Well, I happen to think it’s libertarian. I happen to think that most people in this country are libertarian, they just don’t know it. Here’s the great opportunity leaving here today.”

Read more about the specific issues on Gary Johnson’s website or on his page at On The Issues.

I’ve seen people argue over and over again that voting third-party is “wasting your vote.” Honestly, that’s an immature and self-centered understanding of our political system. The only vote wasted is the vote not cast.

Realistically, Gary Johnson probably can’t beat Donald Trump or Hillary Clinton. Although, honestly, considering how many Republicans are “Never Trump,” and how many Democrats can’t stand Hillary, this is the year when Gary Johnson could actually win.

Regardless, out of all the third-party presidential candidates, Gary Johnson has the best chance at winning 5% of popular vote nationwide. And that 5% matters a lot more than you realize.

Also, if the margin of victory is smaller than the percentage of votes earned by third-party candidates, then the two major parties might realize that they need to listen to dissident voters. Once upon a time, our political system was not so polarized. It’s not too late to practice bipartisan politics again.

Gary Johnson is already polling at 10% against Donald Trump and Hillary Clinton. If that number jumps to 15% in enough national polls, the media networks should invite Gary Johnson to the presidential debates.

To quote my husband, “Repeatedly voting for the lesser of two evils is what has brought us to the ridiculous evil we have today.”

You can make a difference in the political system by voting third-party, even if your candidate doesn’t win.

How do you feel about third-party candidates? What is your opinion on the 2016 presidential race? Share your thoughts below!

P.S. Keep up with all my political thoughts on Twitter!

On March 10, 2022, I received an unexpected email from LinkedIn. Normally Gmail sorts these into … END_OF_DOCUMENT_TOKEN_TO_BE_REPLACED

You are so gorgeous. The words hit me quickly, quietly. Panic rose up in my throat even as I … END_OF_DOCUMENT_TOKEN_TO_BE_REPLACED

On the morning of December 2, 2021, Dan and I arrived at Northside Hospital around 5:20am. The … END_OF_DOCUMENT_TOKEN_TO_BE_REPLACED