True or false. You only need to vote in the November presidential election and not the primary elections.

For most American voters, the presidential primary elections matter more than the general election. Like I’ve said before, if you live in a red state or a blue state, your vote in the presidential election won’t make a difference. The rest of your state will overwhelming vote for a Democrat or a Republican. Your vote won’t change your state’s outcome. (That said, if you vote third-party, you could help future candidates receive public funding like the Republicans and Democrats).

Looking for information on the 2018 midterm election primaries? I’ve written an entire guide for this year’s primary elections!

But the primary elections are an entirely different story.

The presidential primaries determine who will represent the Republicans and the Democrats during the November election. Instead of voting between just 2 candidates, you have the choice of 3 Democrats or 12 Republicans. Unlike the general election, you actually have a chance of voting for your preferred candidate, not just the “lesser of two evils.” 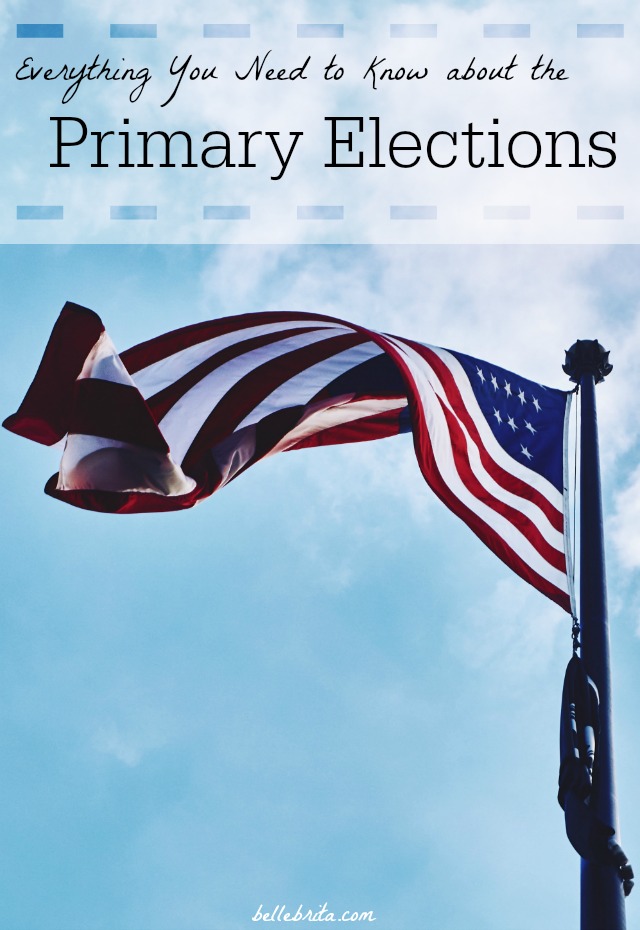 How do the primary elections work?

To understand the primary elections, you first need to know a few key political terms.

Caucus: A public vote where people literally hang out in a massive room and stand on the side of their candidate. People can change their mind and move to another side of the room. You have to stay until the end if you want your vote to count. Unlike a primary, which is organized by local government, the political party itself holds the caucus.

Mixed primary: Independents can choose to vote in the Republican or the Democratic primary, but only one. Republicans and Democrats follow the same rules as a closed primary.

Super Tuesday: When a whole bunch of states hold their presidential primaries on the same day. This year, Super Tuesday is March 1, 2016. It includes 14 states plus American Samoa.

Delegates (pledged): The people who actually get to vote at the conventions, who may or may not represent the votes cast in their state. In a binding primary, delegates must vote on behalf of the voters in the state. If the approach is “winner takes all,” then the delegates all vote for the presidential candidate with the majority of votes. If the approach is “proportional,” then the delegates for the presidential candidates in proportion to their votes received.  Delegates are important political party members locally.

Superdelegates (unpledged): Super-important political party members like senators, governors, and former presidents/vice-presidents. They vote for whomever they choose, supposedly to represent the will of the overall party.

Or you can read the Wikipedia article on the presidential primary elections.

Why should I vote in the primary elections?

Do you REALLY want Donald Trump to be our next president?

Or rather, if you’re in one of the early caucuses or primaries, your vote matters. Your vote can create the front-runner. In the 2012 Iowa caucus, Mitt Romney received 29,805 votes, Ron Paul received 26,036 votes, and Rick Santorum received 29,839 votes. In the 2008 primary elections, Hillary Clinton and Barack Obama went back and forth with the lead, each winning major state primaries. Clinton was leading after Super Tuesday, but Obama took the lead by February 19th.

Plus one political analyst has predicted a close Republican race this year, without a clear front-runner until mid-March or even April.

Edit 04/20/2016: VOTING IN THE PRIMARY STILL MATTERS! The 2016 primaries are the most exciting presidential primaries America has had in decades. Neither the Republican nor the Democratic party has a definite winner yet.

Primary elections can be close races. As a libertarian, people often tell me that I’m “wasting my vote.” I think the only wasted vote is the vote not cast. But if you really want to talk about “wasting your vote,” your vote is wasted in the general election if you live in a blue or red state. If you want your vote to make a real difference, vote in the primary elections.

3) Voting is a great privilege, with great responsibility.

Americans are pretty damned lucky to have the right to vote. Is the system a little confusing? Yes. Is it perfect? Hell no. (Third-party candidates get screwed). Is it still a pretty awesome process that tries to represent the wishes of all Americans? Yes!

American women have had the right to vote for less than a century. The Voting Rights Act didn’t pass until 1965. Americans who came before us often faced great adversity in order to gain suffrage. Honor their courage this year. Vote.

When are the primary elections?

Find your state below! For a full list, including Americans abroad or in US territories, refer to this primary election calendar.

Tuesday, May 24: Washington primary for Republicans

If you think voting is important, please share this post with your friends and family! Together we can vote during the primaries in record-breaking numbers! Who’s with me?!

P.S. Still have questions? I’ve put together a handy FAQ! Have questions about the general election? I’ve shared voter registration deadlines, early voting dates, and other important races besides president!

On March 10, 2022, I received an unexpected email from LinkedIn. Normally Gmail sorts these into … END_OF_DOCUMENT_TOKEN_TO_BE_REPLACED

You are so gorgeous. The words hit me quickly, quietly. Panic rose up in my throat even as I … END_OF_DOCUMENT_TOKEN_TO_BE_REPLACED

On the morning of December 2, 2021, Dan and I arrived at Northside Hospital around 5:20am. The … END_OF_DOCUMENT_TOKEN_TO_BE_REPLACED