Time flies when you’re having fun! I can’t believe I’ve already finished 3 weeks of Whole30. Yesterday I pulled up this post to add in Thursday night’s dinner and yesterday’s breakfast, not even realizing I actually needed to finish this post for today.

This week started while Dan and I were still in Dallas. Like I said last week, I decided to make the best choices I could in restaurants while still enjoying my vacation. I could have stuck with boring food the entire time, but I decided instead to eat as much brisket as possible! It routinely had no allergens listed on the online guides for the restaurants we chose. Plus brisket is delicious anyway! But next time we visit Texas, I do not want to be on Whole30. Dan had some mouth-watering ribs one night. As much as I love brisket, I really love getting different kinds of barbecue.

Other than being on vacation, following Whole30 has been easy this week. 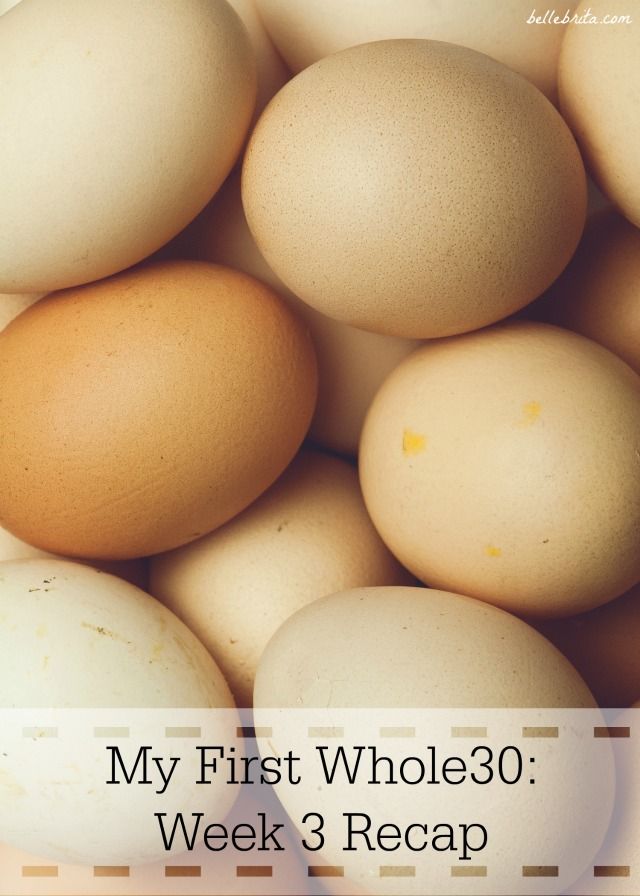 I had some lab work done for my Crohn’s Disease, and I have to do more lab work next week. I really hope my inflammation levels are normal! Once my labs are completed, I’ll have another follow-up appointment with my gastroenterologist. I look forward to telling him about my experience with Whole30. Not to be all TMI (whatever, I have a condition literally referred to as Irritable Bowel Disease), but my poops have been pretty awesome this month.

Even though I get less fiber each day than I did on my regular high-fiber diet, Whole30 means I’m way more consistent in consuming fiber. You can’t slack off during Whole30 like you can during a regular moderate diet. My body immediately informs me when I’ve eaten too much sugar or I haven’t eaten enough fiber.

Enough health updates. Onto the food!

Challenges: Following Whole30 is not easy while on vacation, especially when trying to make smart spending choices too. I ate a lot of brisket in Dallas! I’ve also just accepted that some fried food is necessary when options are limited. The potato chips with lunch were more compliant than the baked beans or cole slaw.

Challenges: I’m so glad I found the Cajun cashews at a local farmer’s market the day before. They were a great snack to add to my supplies while in Dallas.

Challenges: Finding a fast food place with compliant food other than salads for lunch was tricky. I was too cold to eat a salad! I cross-referenced the nutritional facts chart with the allergens chart to determine none of the wing sauces (except for two very spicy ones) were compliant. I ordered them plain. Luckily they had tons of lime wedges, so I just juiced lime over my wings. Again, I know deep-fried food isn’t technically Whole30, but it’s an easy rule for me to bend.

Challenges: I weighed myself (against the rules, I know), and I’ve lost weight. Not much (110-112 instead of 113-115, not counting my post-Christmas 117), but enough that I want to gain it back. While most people want to lose weight during Whole30, I’ve tried really hard to eat a lot of healthy fats so that I wouldn’t lose weight. I’m completely accepting fried food in my diet now to help me consume more calories.

Challenges: None! Dan & I are having a blast experimenting with new dishes. This is the first time I ever prepared fish for us. In my tweet below, Dan’s plate is on the left and mine is on the right. I cooked all of these in foil packets with some ghee. His whole fillet was seasoned with a barbecue rub. We split the fillet seasoned with herbs de Provence, garlic salt, and lime juice. My whole fillet had lemon pepper, garlic salt, and lime juice. I liked the lemon pepper best!

Challenges: Aside from being hungry at weird times, today was great!

I’m getting close to the end! Any tips for reintroducing foods back into my diet when I finish Whole30?

You are so gorgeous. The words hit me quickly, quietly. Panic rose up in my throat even as I … END_OF_DOCUMENT_TOKEN_TO_BE_REPLACED

On the morning of December 2, 2021, Dan and I arrived at Northside Hospital around 5:20am. The … END_OF_DOCUMENT_TOKEN_TO_BE_REPLACED

I was diagnosed with Crohn's Disease more than 25 years ago, at just 8 years old. While my parents … END_OF_DOCUMENT_TOKEN_TO_BE_REPLACED