Note: This is a response to Christians: the Most Silenced Group of All. Please note that I focus only on American Christians in this response, while the author seemingly writes from a broad perspective. However, she vaguely refers to American-specific situations, and she’s an American blogger.

I’m an American Christian, one of the most privileged groups in the United States, comprising of 70.6% of the overall population.

Other Americans judge American Christians based on the words and the actions of prominent Christians and Christians in the media. As a Christian feminist, I understand if I meet someone who dislikes or mistrusts Christians. I know how hateful and judgmental many Christians can be.

I do my best to explain that Christians in America are actually a diverse group who do not agree with each other on many issues, include same-sex marriage, the ordination of women, contraception, and more. 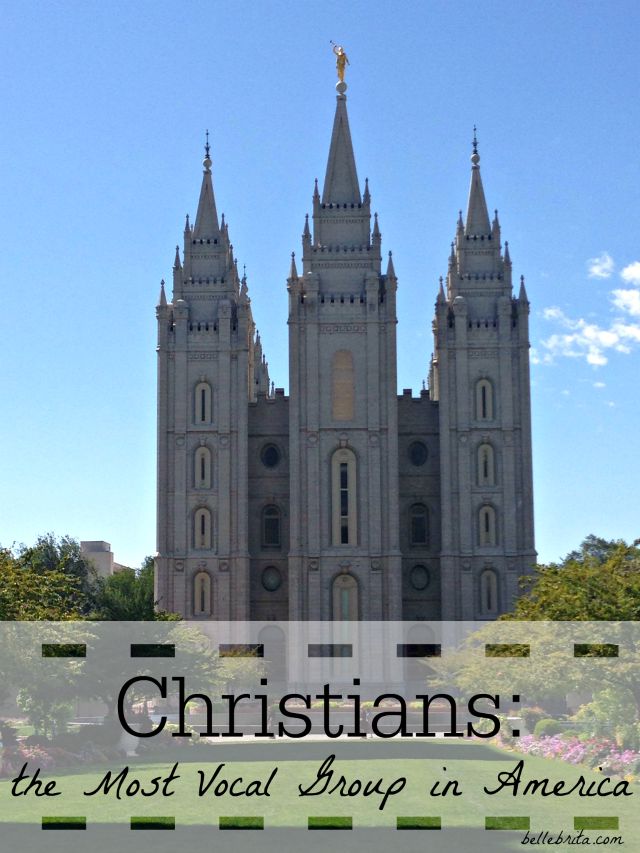 Some Christian Americans are judgmental, filled with hatred and condemnation for those who don’t fit into their narrow vision of strict gender roles and heterosexual marriage. Understandably, when some Christians choose to discriminate based on their personal interpretation of the Bible, other people call those Christians bigots.

That said, I have yet to meet a Christian American who has been kicked out of their home, assaulted, or killed for their bigotry. However, clearly the opposite is true for LGBTQ+ individuals.

Highly religious parents are significantly more likely than their less-religious counterparts to reject their children for being gay – a finding that social-service workers believe goes a long way toward explaining why LGBT people make up roughly five percent of the youth population overall, but an estimated 40 percent of the homeless-youth population.

From ThinkProgress, research done by the Williams Institute:

Of all the agencies’ LGBT homeless clients, 68 percent have experienced family rejection and more than half (54 percent) experienced abuse in their family…

It’s all too easy to see LGBT homeless youth as an invisible population, but there is a very visible onslaught of anti-gay and anti-trans propaganda specifically targeting parents to raise their fears of the LGBT community. Rather than protecting children, the anti-gay efforts led by conservative evangelical Christians may very well be causing the exact kinds of child abuse that they blame LGBT people for.

And if you really want to be depressed, read through the Wikipedia article on violence against LGBTQ+ people in the United States.

If the worst “persecution” we face for our faith is the label of “bigot,” we can’t claim actual persecution.

Not only do Christians make up a majority of the American population, but we’re also over-represented in politics. Only one of the 2016 presidential candidates is not a Christian. Bernie Sanders is Jewish by birth, but is not currently part of any organized religion. Furthermore, almost all past U.S. presidents were Christian. Finally, 92% of the 114th Congress is Christian.

Which is a statistical way of pointing out that Christians aren’t exactly “silenced” in the United States. Nor are American Christians ostracized or shunned from the world.

Some Christians are upset to lose some of the privileges they’ve long enjoyed at the expense of Americans with different faiths. As the late U.S. Supreme Court judge Oliver Wendell Holmes, Jr. once said, “The right to swing my fist ends where the other man’s nose begins.” What are some of those rights for all Americans?

First, let’s look at the Bible…

Let every person be subject to the governing authorities; for there is no authority except from God, and those authorities that exist have been instituted by God. Therefore whoever resists authority resists what God has appointed, and those who resist will incur judgment. For rulers are not a terror to good conduct, but to bad. Do you wish to have no fear of the authority? Then do what is good, and you will receive its approval; for it is God’s servant for your good. But if you do what is wrong, you should be afraid, for the authority does not bear the sword in vain! It is the servant of God to execute wrath on the wrongdoer. Therefore one must be subject, not only because of wrath but also because of conscience. For the same reason you also pay taxes, for the authorities are God’s servants, busy with this very thing. Pay to all what is due them—taxes to whom taxes are due, revenue to whom revenue is due, respect to whom respect is due, honor to whom honor is due. -Romans 13:1-7, NRSV

And the U.S. Constitution…

Congress shall make no law respecting an establishment of religion, or prohibiting the free exercise thereof; or abridging the freedom of speech, or of the press; or the right of the people peaceably to assemble, and to petition the Government for a redress of grievances. -First Amendment

In 35 states, parents can choose for their children to opt out of sex education in public schools. In 37 states, school districts must allow parental involvement in sex education. If you do not live in one of those states, you can still choose to homeschool your children or send them to private school.

Considering only 19 states require that sex education be medically accurate, I’m pretty sure conservative Christians are winning the battle to force their abstinence-only perspective in public schools. Source

If you run a business in the United States, you have to follow certain laws, which already provide all sorts of exceptions and exemptions. Federal public accommodations laws prevent discrimination on the basis of race, color, religion, or national origin. Some states, counties, and cities have their own public accommodations laws to prevent discrimination on the basis of sexual orientation and/or gender identity.

This means that a Christian bookstore can’t prohibit a woman from buying seminary textbooks just because the owners don’t support the ordination of women. This also means that in some parts of the country, a Christian-owned restaurant can’t refuse to serve a gay couple.

On the flip side, a Wiccan bookstore can’t prohibit Christians from buying their books. A Muslim-owned restaurant can’t refuse to serve Christians.

Christians are still allowed to say or write pretty much anything we want, as long as we don’t break any defamation laws. But that whole free speech thing is a two-way street. So you can say that my husband and I will end up divorced because I didn’t take his last name. I can say you’re a misogynistic asshole.

That also means that when some American Christians make bigoted statements, the rest of us call them bigots.

Also, freedom of speech means the government can’t restrict your speech. Free speech doesn’t mean you get to say whatever you want without criticism or repercussions from people or companies. If I say my boss is a tyrant, she can fire me.

Call to My Fellow American Christians

Stop acting wounded or persecuted just because our country is starting to require true equality before the law.

Stop pretending the entire world is scorning us when Christian Americans continue to dominate the American landscape, and when the United States is among the most powerful and wealthy in the world. While it’s possible the rest of the world literally scorns Christian Americans, will their opinions actually hurt us? (No).

Stop pretending that you’re truly treating people with love when you “hate” their “sin.”

Stop acting like you’re the world’s greatest authority on the Bible, on sin, on salvation, and on Christianity.

Stop speaking on behalf of all Christians.

Stop trying to define what it means to be a “true Christian.”

Stop dismissing “social issues” as “sin.” Because the latest social issues have a lot more to do with equality and loving your neighbor as yourself than they have to do with sin.

May us Christian feminists not be afraid to share our faith.

May we selflessly love even the men who would strip women of our reproductive rights.

May we selflessly love even the Christians who support discrimination against people they don’t like.

And through our example, may both non-believers and conservative Christians realize there is more than one way to follow Christ.

You are so gorgeous. The words hit me quickly, quietly. Panic rose up in my throat even as I … END_OF_DOCUMENT_TOKEN_TO_BE_REPLACED

On the morning of December 2, 2021, Dan and I arrived at Northside Hospital around 5:20am. The … END_OF_DOCUMENT_TOKEN_TO_BE_REPLACED

I was diagnosed with Crohn's Disease more than 25 years ago, at just 8 years old. While my parents … END_OF_DOCUMENT_TOKEN_TO_BE_REPLACED