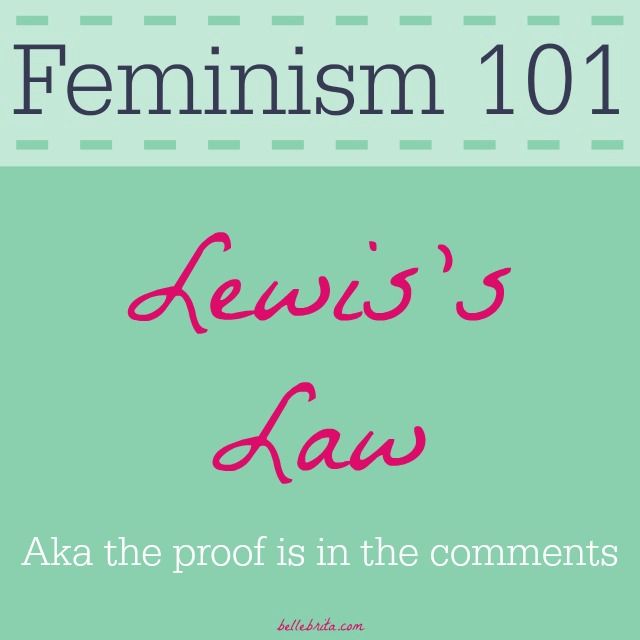 Have you ever heard of Lewis’s Law?

First articulated by Helen Lewis, this Internet rule explains the phenomenon of the comment sections on articles about feminism.

As I've just told @alicetiara, the comments on any article about feminism justify feminism. That is Lewis's Law.

“As I’ve just told Alice Tiara, the comments on any article about feminism justify feminism. That is Lewis’s Law.”

For June’s The F-Word link-up with Kelly and Kiersten, the optional prompt is “What kind of backlash (if any) have you faced for speaking out about feminism?”

Lewis’s Law is certainly true in my experience.

My most recent syndicated piece for The Huffington Post was a condensed version of “The Question No One Asks My Husband.” If you don’t feel like reading the original or the HuffPo copy, just read the selected passage below.

Do you not love your husband?
Are you planning a future divorce?
Why did you even get married if you didn’t want to change your name?

The comments on my original piece are mostly supportive. Alas, The Huffington Post attracts some of the most ignorant people on the Internet. The comments roughly divide pretty evenly into three groups.

Just so we’re clear here, I literally stated in my blog post that some people assume Dan and I are doomed for divorce because I didn’t take his last name. The response to that was people accusing me of lying WHILE other people said Dan and I will get divorced.

That is only the most recent example of how the comments on any article about feminism prove the need for feminism.

There were also the responses to my bikini post, which were again evenly mixed between:

Group #2 always cracks me up.

Remember ladies, if it doesn’t happen to a man, it never actually happened.

(You’ll need to read the HuffPo version again if you want the ridiculous comments).

One reaction that I find to be both amusing and pessimistic is when people tell me there are bigger things to worry about.

By myself, I probably cannot do anything about the vast majority of intimate partner violence, against men or women, that will happen during my lifetime.

By myself, and with others, I certainly aspire to accomplish even more in my lifetime. But my own individual contributions to this world are pretty darn good for someone not yet 28, with Crohn’s Disease often limiting my free time.

On March 10, 2022, I received an unexpected email from LinkedIn. Normally Gmail sorts these into … END_OF_DOCUMENT_TOKEN_TO_BE_REPLACED

You are so gorgeous. The words hit me quickly, quietly. Panic rose up in my throat even as I … END_OF_DOCUMENT_TOKEN_TO_BE_REPLACED

On the morning of December 2, 2021, Dan and I arrived at Northside Hospital around 5:20am. The … END_OF_DOCUMENT_TOKEN_TO_BE_REPLACED